Partnership between NHS and Police receives Commendation from the Chief Constable 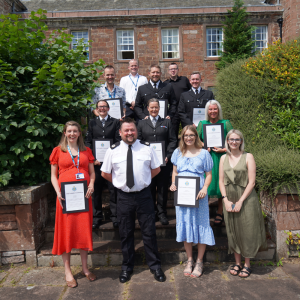 A successful partnership between police and mental health clinicians to help people in crisis has been expanded to support West Cumbria.

And the team have now been awarded a Commendation and Certificate of Merit from the force’s Chief Constable in recognition of their work.

The Street Triage Team is a partnership between Cumbria Police and Cumbria, Northumberland and Tyne and Wear NHS Foundation Trust (CNTW), provider of specialist mental health and disability services across the region.

It sees mental health clinicians and police officers teaming up so they can effectively support people who come into contact with the police during a mental health crisis.

The service was successfully piloted in Carlisle in the summer of 2021. Since January 2022 a second Street Triage Team has been supporting people the West of Cumbria (including Whitehaven, Workington, Cockermouth, Keswick, and Wigton).

And on the 19th July 2022, the team were presented with two awards for their work by Cumbria Police, at the Police’s headquarters in Penrith.

As a force our priority is to keep people safe. The Street Triage Team enables us to do this, getting people in crisis the most appropriate support as quickly as possible.

Explaining the importance of the Street Triage Team, Detective Superintendent Dan St Quintin said: “Over the past few years, the constabulary has seen an increase in the number of calls for service in which people are in crisis, in complex and difficult situations, and are potentially a harm to themselves or others.

“As a force our priority is to keep people safe. The Street Triage Team enables us to do this, getting people in crisis the most appropriate support as quickly as possible.

“The success of this service is a great example of what we can achieve by working together with our partner agencies to understand and address the demand around mental health.”

The East and West Street Triage Teams are each made up of a number of Mental Health Practitioners and experienced police officers, who work together in pairs.

When Cumbria Police respond to an incident, the Street Triage Team will be asked to attend if officers believe that someone involved is experiencing a mental health crisis or is in severe distress. At the scene, they can assess the person’s mental state face-to-face in the teams’ modified, unmarked vehicles, which enable private conversations in a safe and discrete space.

The team discuss the most appropriate way support the person, and create a ‘safety plan’ with them. They can also refer them on to other support services if needed, and perform a follow-up wellbeing check with the person 24-48 hours after the incident.

Our main focus is always making sure that the individual’s voice is heard and that they safely get access to the right support, at the right time, in the right place for them

“We have heard from many service users, Police officers and other health professionals about the positive impact the service is having.

“And I am incredibly proud that the team’s fantastic work has been recognised by the Chief Constable.

“Our main focus is always making sure that the individual’s voice is heard and that they safely get access to the right support, at the right time, in the right place for them,” Deborah emphasises.

Through this service, CNTW and Cumbria Police are working to reduce unnecessary police detention of people in crisis. Police have powers under section 136 of the Mental Health Act to take immediate control of someone who they deem is a high risk to themselves or others. But those powers can sometimes lead to unnecessary detention that is distressing and unhelpful for the individual. In many cases, experienced clinicians can help a person onto the right support pathways without the need for them to be detained. This is what the Street Triage Team aims to do.

And so far, they have seen very successful results. Between May 2021 and June 2022, the Street Triage Team in the East of Cumbria have prevented 188 unnecessary detentions (occasions when, without the Team’s support, police may previously have needed to use Section 136 powers to detain somebody). And the newer Street Triage Team in the West of Cumbria have prevented 41 unnecessary detentions since the team began work in January 2022.

The teams have completed over 500 face-to-face assessments to support people in crisis, and have also provided remote advice and support on more than a thousand other occasions.

And the team have received glowing feedback from those they have supported, with comments such as: “I felt listened to when I needed support,” “They listen and help you make a plan,” and “They made me feel reassured and safe.”

The teams currently operate seven days a week in East and four days in West Cumbria, during the peak times for mental health-related callouts identified during the pilot.

But there are plans to have the service running seven days a week in both areas by the end of the summer, to support even more people. Recruitment of more nurses and police officers to staff the service is already underway.