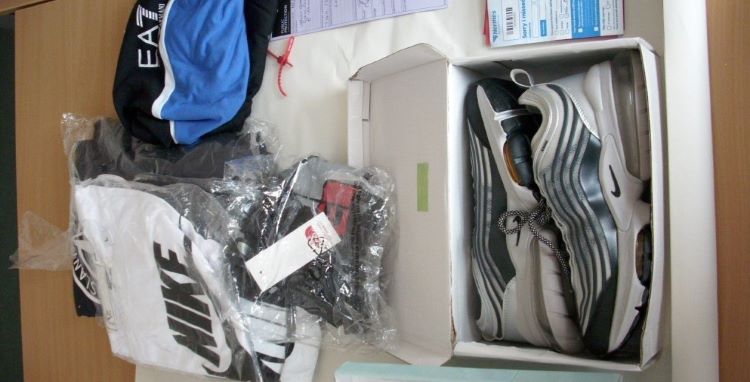 Nicole Brudenell from Hamoaze Road, Torpoint and Hope Jarvis from Ordinance Way, Ashford in Kent were sentenced by Bodmin Magistrates on Tuesday 19 July 2022 for selling and supplying counterfeit goods via private Facebook groups.

Following guilty pleas to offences under the Trade Marks Act 1994 at an earlier hearing, Jarvis and Brudenell were each sentenced to a 12-month Community Order and must each pay £1000 towards costs, plus a £95 surcharge

Cornwall Council Trading Standards Officers covertly purchased fake shoes from Brudenell in July 2021, after joining her private Facebook selling group. Investigators later applied for a warrant to search her home, where they found counterfeit clothes, trainers and accessories from brands purporting to be Adidas, Nike, Gucci, NorthFace and Boss.

Analysis of mobile phones seized from Brudenell showed a history of messages and online listings which demonstrated that she was running a significant business. The records also revealed that Hope Jarvis had been working with Brudenell to supply these items as part of a wider distribution network.

The court was told how Brudenell had been running this business for around four years under a variety of different group names. During this period of trading, she had also been in receipt of state benefits.

When Brudenell’s own Facebook group was closed down, Jarvis contacted Brudenell’s customers offering them the opportunity to join her own group, in order to continue supplying fake goods.

Cllr Martyn Alvey, Cornwall Council Portfolio Holder for Environment, which includes public protection, and Climate Change said: “This sentence sends a strong message to those that dupe the public by selling counterfeit goods and pass them off as the real thing. Businesses who trade legitimately face unfair competition from those who seek to flout the rules. Our regulatory teams will seek out the perpetrators and we will not hesitate to pursue legal action against them.”

Gary Webster, Cornwall Council’s Fair Trading Team Manager said: “Unfortunately this kind of illegal activity remains all too common. Selling counterfeit goods is not a victimless crime, as we know that genuine local businesses are affected by the unfair competition that these operators create. In addition to the exploitation of those involved in manufacturing of these goods, the products are often of poor quality.”