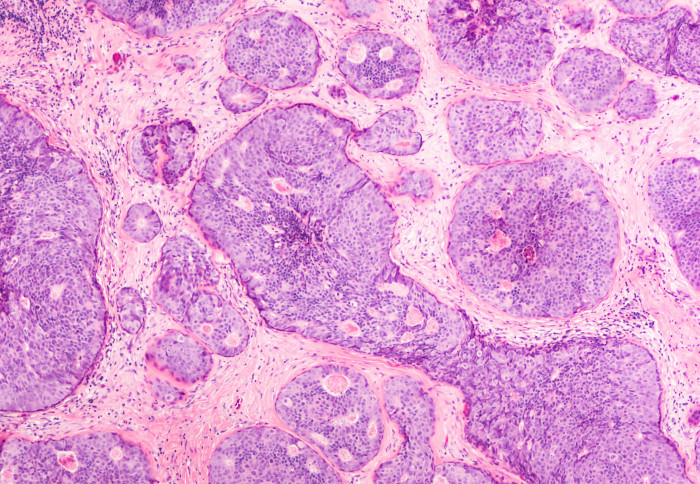 Changing the order of treatments given to breast cancer patients could reduce side effects and improve outcomes, according to an Imperial study.

In a clinical feasibility trial, published in the Lancet Oncology, researchers found that switching the sequence of treatments given to breast cancer patients was safe, without any increase in complications and could lead to patients receiving faster and more effective care compared to current methods.

Thirty-three women with breast cancer requiring a mastectomy – an operation to remove a breast or breasts to treat cancer – and post-mastectomy radiotherapy, were recruited to the primary radiotherapy and deep inferior epigastric perforator flap reconstruction for patients with breast cancer (PRADA) trial between January 2016 and December 2017.  They were also eligible for a breast reconstruction using tissue from another part of their body.

The study was led by researchers at Imperial College London and clinicians at The Royal Marsden NHS Foundation Trust and Imperial College Healthcare NHS Trust.  It was funded by the National Institute for Health and Care Research Imperial Biomedical Research Centre (BRC) and the Cancer Research UK (CRUK) Imperial Centre.

It is the first multi-centre study to provide comprehensive data on the surgical safety, treatment pathway times, and aesthetic outcome of this new treatment approach.

1) Can you tell me about your study?

Daniel Leff (DL): The research we are undertaking seeks to tackle major issues associated with reconstructive surgery, following a mastectomy and radiotherapy for breast cancer patients.

We wanted to see whether changing the sequence of treatments was safe in the short term and would reduce these complications in the long term.

2) Can you explain more about the complications some patients experience following radiotherapy to breast reconstructions?

DL: The type of complications we see are shrinkage and loss of symmetry in the reconstructed breasts. Some women also experience a firm hard lump in their breast following radiation called ‘fat necrosis’ – a non-cancerous condition that can develop when an area of fatty breast tissue is injured.

This occurs because the radiation used to kill cancer cells can impair the blood supply to certain areas of the reconstruction causing a palpable lump. As these patients have been through breast cancer, feeling a lump in your reconstructed breast can cause significant worry and anxiety even if it is non-cancerous.

Additionally, there is evidence suggesting that patients who have radiation after surgery have a worse quality of life in terms of satisfaction with their reconstruction and physical health due to these complications.

3) What were the main findings of the study?

DL: We recruited 33 patients to the study and found that changing the sequence of the treatment was safe and technically feasible. The rates of complications were similar to those reported in other studies – four patients developed an open wound greater than one centimetre and one patient had required a re-operation to tackle dead skin.

4) How significant are these findings?

Paul Thiruchelvam (PT): Approximately 55,000 women and 370 men are diagnosed with breast cancer every year in the UK, so these findings are hugely significant because it means we now have evidence that shows giving patients radiation therapy before a mastectomy and a reconstruction is safe.

Specifically, our results demonstrate that radiation therapy did not impact the ability of surgeons to perform complex breast reconstructions such as using tummy tissue to create a new breast mound that comes as close as possible to the form and appearance of the natural breast or breasts.

Also, there was no increase in the frequency of problems we see after breast surgery such as infections of the wound, necrosis (death of body tissue) of the mastectomy skin or with the reconstruction failing to pick up a blood supply. Finally, none of the patients’ reconstructions failed (i.e. had to be removed).

5) How can this study benefit the NHS?

PT: The study could benefit the NHS in several ways. Firstly, compared to standard care, our treatment approach may reduce the overall treatment journey for patients by approximately one month.

We believe that, in the long term, this approach will improve patients’ mental and physical wellbeing with higher quality of life scores and satisfaction with their reconstructed breasts compared to current care. It also means that many patients who are currently denied reconstruction due to concerns of further complications due to radiotherapy may be able to get access to this treatment in future.

6) What are the next steps?

PT: We are looking into a further and larger trial – PRADA 2 – to urgently confirm the benefits of our treatment approach on quality of life, long-term cancer outcomes and timelines for treatment plans.