Harrogate and District NHS Foundation Trust has demonstrated its support for the armed forces community by signing the Armed Forces Covenant.

The Armed Forces Covenant is a promise by the nation ensuring that those who serve or have served in the Armed Forces, and their families, are treated fairly.

The voluntary pledge acknowledges that veterans and serving personnel should have the same access to services as the civilian community and should not face disadvantages in their day-to-day lives owing to their time as part of HM Armed Forces.

Jonathan Coulter, Chief Executive of HDFT, and Mark Chamberlain, Chair of HIF, were joined by Lieutenant Colonel Will Blackhurst, Commanding Officer, 4th Battalion, The Yorkshire Regiment to sign the covenant.

HDFT has also retained its Silver Defence Employer Recognition Scheme (ERS) Award for its commitment to supporting the Armed Forces community. HDFT was first presented with the silver award in 2017, which encourages employers to support defence and inspire other organisations to do the same.

The silver award is given to employers who have shown their support for existing or prospective employees who are reservists or armed forces veterans, and their spouses/partners. Holders of the silver award need to be able to demonstrate the armed forces community are not disadvantaged as part of their recruitment policy and the organisation supports reservists’ mobilisation commitments.

HDFT employs many veterans and forces family members who bring unique experience and highly transferable skills.  The Trust actively seeks new employees from the armed forces community and advertises its vacancies through the MOD’s Career Transition Partnership and Forces Families Network.  The Trust offers reservists five days additional paid leave for annual training as well as support should they be mobilised.  HDFT encourages its staff to identify patients who are members of the armed forces community so they can tailor support to their needs. The Trust also has strong links to many organisations which can offer support to veterans and other members of the armed forces community. 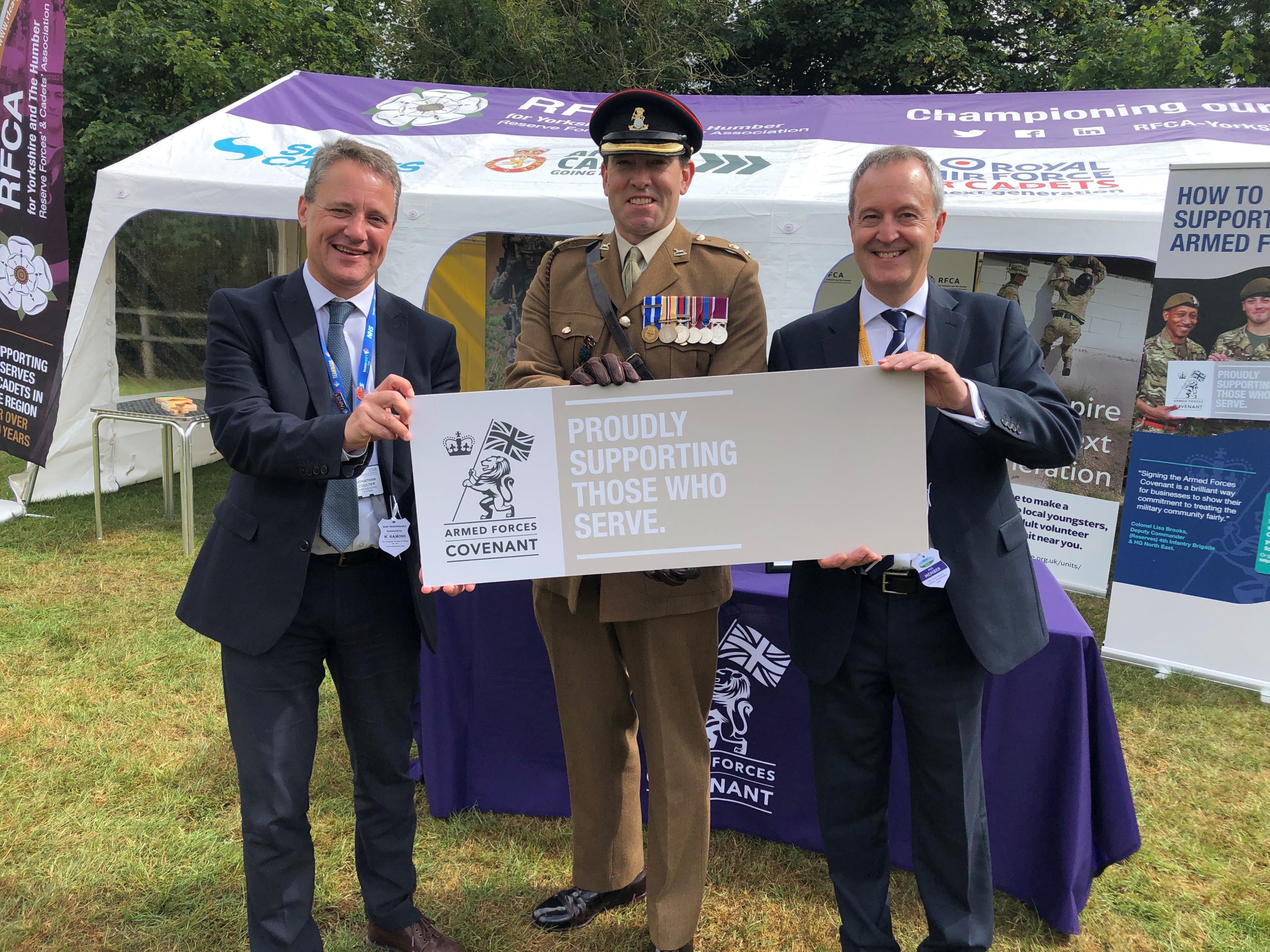 Jonathan Coulter, Chief Executive at HDFC said: “We are extremely proud to have signed the Armed Forces Covenant and retained our Silver Employer Recognition Award.

“As an NHS Trust it is important that we provide the same level of care to every member of our community.  Our armed forces play a vital role and often make immense sacrifices to keep us all safe and we have an obligation to look after them – whether that is as a care provider or as an employer.

“Our region has a strong military heritage and we have a significant number of employees who have served in the armed forces or are reservists and it is important that we recognise the contribution they have made by supporting them however we can. We are committed to ensuring that the armed forces community are treated fairly, with the respect they deserve and do not face any disadvantages.”

Mark Chamberlain said: “I am honoured to have signed the Armed Forces Covenant on behalf of Harrogate Integrated Facilities Limited. The veterans and reservists who work for us play an important role for our local community, ensuring that the health care service they rely on runs efficiently, and it is important that they feel supported in their roles. I look forward to working with our armed forces colleagues over the coming months and years.”

Phil Walton, Head of Engagement at the Reserve Forces and Cadets Association for Yorkshire and the Humber said: “Great employers make a huge difference to the wider Armed Forces Community and I’m delighted that Harrogate and District NHS Foundation Trust and Harrogate Integrated Facilities Ltd have not only re-signed the Armed Forces Covenant, but have also achieved revalidation of their ERS Silver status. We look forward to honouring them and the other award winners at a glittering ceremony in York later in the year.”