Trainers from the London Ambulance Service have recruited 200 new London Lifesavers among the capital’s Hindu community this week, during a prominent festival at Neasden Temple. 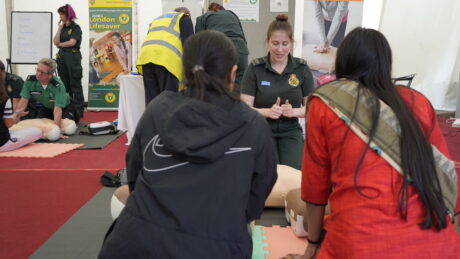 The London Lifesavers event formed part of a week-long Festival of Inspiration at the temple, in north-west London, celebrating the centennial birth anniversary of the temple’s founder, His Holiness Pramukh Swami Maharaj.

LAS community resuscitation trainers and first responders spent a day in the festival’s health hub on Monday (25 July) training 200 volunteers to undertake chest compressions and use a defibrillator – which is a device that uses an electric shock to help restart someone’s heart should it suddenly stop pumping blood around their body, which is known as cardiac arrest.

The newly-trained London Lifesavers include members of the local Neasden community, along with Londoners from across the capital and Leader of Brent Council, Cllr Muhammed Butt. 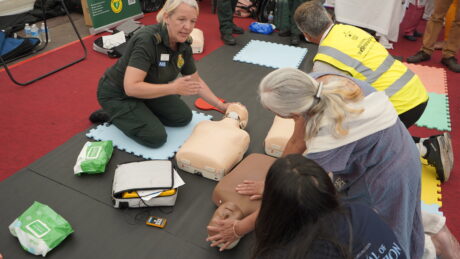 Across the capital last year, LAS responded to almost 14,000 cardiac arrests, and in the few minutes it takes for an ambulance crew to arrive at the scene, the actions of bystanders can make the difference between life and death. Without lifesaving interventions like CPR (cardio-pulmonary resuscitation) and defibrillators, the patient’s chances of survival decrease by about 10% with every passing minute.

Samantha Palfreyman-Jones, Head of First Responders at LAS, said: “It’s been fantastic to see the community come together to learn how to be lifesavers. Our new London Lifesavers are joining a community of thousands of volunteers across the capital who have the training to step in and help save a person in cardiac arrest.

“For a person in cardiac arrest, every moment counts, so it’s vital that members of the public are confident in being able to help while we are on our way. I encourage anyone to take part in our training, to step up and become a London Lifesaver.”

LAS Chief Medical Officer, Dr Fenella Wrigley, said: “A cardiac arrest happens suddenly, and sadly, it can happen to anyone, at any time. Risk factors for cardiovascular disease which might result in a cardiac arrest include patients who are male, smokers, have diabetes, high blood pressure, and people of South Asian or sub-Saharan Africa origin, so we have welcomed the invitation to provide London Lifesavers training at Neasden Temple to the local community.

“If a member of the public intervenes during a cardiac arrest and is able to start chest compressions straight away or use a defibrillator, the chance of survival increases significantly, and the extent of possible brain injury can also be reduced.”

LAS’s London Lifesavers project is backed by Mayor of London Sadiq Khan, and has been boosted by £895,000 of funding from NHS Charities Together. It aims to bring the number of trained volunteers to 100,000 across the capital, and to increase the number of defibrillators around London from 6,500 to more than 10,000. Achieving that will mean more than 100 lives ever year could be saved.

Through the scheme, LAS is working with communities and organisations to deliver training in CPR and the use of defibrillators, and support local communities to introduce a further 4,000 public access defibrillators around London.

Once trained, Londoners will have the option to be connected to LAS automatic alerting systems, such as the GoodSAM app. These systems are linked to our 999 call system and send out an alert to trained London Lifesavers when someone nearby is in cardiac arrest. Importantly, our 999 call handlers are always here to help if you witness someone collapse and can talk you through what to do. London Lifesavers will also be kept up to date via regular newsletters on the latest guidance and news stories.

There are lots of ways to get involved and become a London Lifesaver, including opportunities for organisations, communities and workplaces.

LAS also offers support and advice on how to buy and use defibrillators for communities and organisations in London.