The London Ambulance Charity has smashed its target to raise £10,000 through its “Outrun an 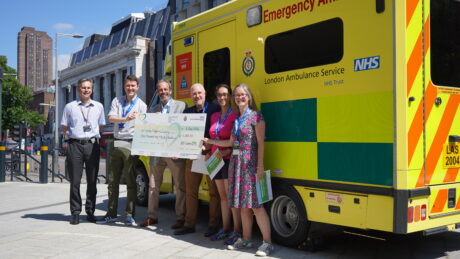 The NHS England Emergency Preparedness Resilience and Response (EPRR) team went the extra mile for the charity and raised more than £1,000, taking total donations to more than £10,750.

Dr Chloe Sellwood, leader for the EPRR team, said: “This was such a great challenge for a big team of people of all different abilities coming together to support such a great cause.

“We all completed the challenge in our own way – some ran or walked, some swam and some cycled – but we were a real team when it came to supporting each other.”

The Outrun an Ambulance challenge launched earlier this year and invited people to go further than the mileage a London ambulance covers on an average 12 hour shift, which is around 30 miles.

Participant can take as much time as they need to complete the distance.

Funds raised for the London Ambulance Charity will help support the welfare of London Ambulance Service (LAS) staff and volunteers who are continuing to respond to record levels of emergency calls in and around London.

“It’s wonderful to have smashed our fundraising target thanks to our friends in the NHS supporting our ambulance staff and volunteers in this way – and I know they had a lot of fun doing so.

“These sponsorship events make a real difference to our charity and by taking care of our people, they are better able to take care of our patients, particularly during these challenging times.”

People can still sign up to Outrun an Ambulance and raise vital funds for the London Ambulance Charity.

For more information and to set-up a personal fundraising page for the ‘Outrun an Ambulance’ challenge visit www.outrunanambulance.co.uk.

Sally added: “Our crews and call handlers always go that extra mile, now it’s your chance to go the extra mile for them!”

You can find more information about the London Ambulance Charity here.