The July graduation ceremonies for the University of Bedfordshire’s Class of 2022 have concluded with a traditional Civic Ceremony in Luton.

Taking place on Friday 29th July at St Mary’s Church, the graduation ceremony was held for graduates of the Business School, who were joined by family, friends, faculty staff and dignitaries from the local community. 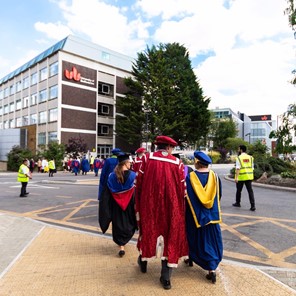 This year, the Luton and Bedford Civic ceremonies were able to be held for the first time since 2019, which were postponed due to the Covid-19 pandemic.

Professor Rebecca Bunting, Vice Chancellor, was joined by academic staff and distinguished guests – including members of Luton Borough Council and local businesspeople – for a procession from Luton Town Hall to St Mary’s Church, based at the Luton campus, accompanied by a live steel pan band. 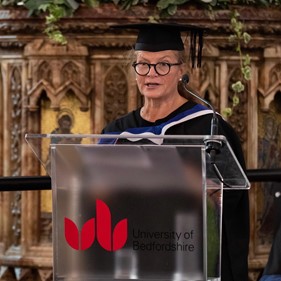 Graduates were also joined by Guest of Honour, HHJ Marianna Catherine Thoroton Hildyard QC, from Her Majesty’s Courts and Tribunal Service who serves at the Luton Justice Centre and Bedford County Court. She gave an inspiring speech to graduates about her career in the legal profession and the vital difference law students can make in their communities.

A number of prizes were also presented to students at the July graduation ceremonies, including the Lord Lieutenant’s award for Student Engagement presented to Toby Crabb; a prize donated by local solicitors Machins which was awarded to the highest achieving third-year LLB Law student, Ioana Schiopu; and the Business School’s Executive Dean’s Prize for Aviation Management won by James Silman.

Student crowned ‘Midwife of the Year’

Public health expert to give insight into pandemic and vaccines