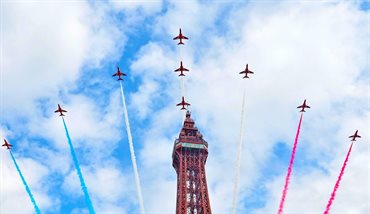 Blackpool is gearing up for the long-awaited return of one of the world’s most spectacular aerial display teams.

The magnificent Red Arrows will perform at 5.00pm both days of the Blackpool Air Show on Saturday 13 and Sunday 14 August, their first appearance in the resort since 2018.The Reds will bring their astonishing acrobatic skills high above the seafront opposite the iconic Blackpool Tower.

The team’s pilots will be doing some meet and greet sessions around the viewing area on the Tower Festival Headland.The free two-day show will also feature thrilling displays from a wide range of military and civil aircraft including the Red Arrows, the Battle of Britain Memorial Flight, Typhoon, Chinook, Muscle Pitts stunt plane, Strikemaster and the AeroSuperBatics Wingwalkers.

Organisers VisitBlackpool are advising visitors to get to the resort early as demand for public car parks is likely to be exceptionally high.

An overspill car park will be available at Blackpool Airport at the south end of the promenade, offering visitors a chance to park all day for £5 using the PayByPhone app. The car park is a short walk from the Starr Gate tram terminus, where people can take a tram to the Tower Festival Headland.

“The Air Show is one of our biggest events, attracting around 100,000 people over the weekend. The much-anticipated return of the Red Arrows creates an even bigger draw.

“We are thrilled that the Reds will be providing a breath-taking finale on both days. Anyone who has witnessed a Red Arrows display over the Blackpool seafront will know that it’s a photographer’s dream, so don’t forget your cameras – and please do plan your journey and arrive in resort early so you don’t miss a moment of the action.”

“Displaying at Blackpool is always one of the highlights of any busy summer for the Red Arrows. With the Tower in sight and the wonderful coastline stretching out before you, Blackpool is a location which really excites you as a display pilot.
“One of the key aims of the Red Arrows is to inspire people of all ages and backgrounds through a dynamic demonstration of teamwork and precision. This is another reason why Blackpool Air Show is a great event for us – it attracts tens of thousands of people, many of whom are families, and it’s wonderful to know so many are watching and enjoying our new display.”

To complement the aerial programme, there will be plenty to see and do on the ground with a wide range of stalls, attractions and food concessions in the Air Show Village on the headland. This summer, the village is sponsored by the seafront family entertainment centre, Coral Island.

Here’s a taste of what visitors can expect this year:

The Royal Air Force Aerobatic Team, the Red Arrows, is one of the world’s premier aerobatic display teams. They will perform at the Blackpool Air Show on both days.

Flying distinctive Hawk fast-jets, the team is made up of pilots, engineers and essential support staff with frontline, operational experience. Together, they demonstrate the excellence and capabilities of the Royal Air Force and the service’s skilled, talented people.

With a breath-taking combination of close formations and precision flying, the Red Arrows have been displaying since 1965. Based at RAF Scampton in Lincolnshire, the Red Arrows had flown almost 5,000 displays in 57 countries, by the beginning of 2022 – the team’s 58th season.

The Royal Air Force Battle of Britain Memorial Flight (BBMF) operates from RAF Coningsby, a Typhoon base, in Lincolnshire.

The mission of the RAF BBMF is to maintain the priceless artefacts of our national heritage in airworthy condition in order to commemorate those who have fallen in the service of this country.

The Blackpool Air Show weekend will see a display on both days by a Spitfire, Hurricane and Lancaster Bomber, one of only two airworthy Lancasters in the world.

The RAF Chinook Display Team, based at RAF Odiham in Hampshire, aims to demonstrate this giant helicopter’s all-round capability.

The Chinook is an extremely capable and highly versatile support helicopter that can be operated from land bases or seaborne vessels into a range of diverse environments, from the Arctic to the desert or jungle.

The aircraft may be heavily armed and is fitted with a suite of self-defence equipment allowing it to operate across highly contested battlespace. Chinooks are primarily used for trooping, resupply and battlefield casualty evacuation but the crews are trained to accomplish these tasks under threat from both ground and air-based enemies.

In addition to its traditional war fighting roles, the Chinook’s lifting capability is held at readiness under the National Resilience commitment to respond to emergencies in the UK; in recent years these have included resupplying snowbound farmers in Northern Ireland and moving tons of aggregate to help reconstruct flood defences damaged by winter storms.

As well as being part of the RAF Chinook Display Team, the crew are also part of a fully operational Squadron where they combine their daily training demands with practising their display sequence.

In 2021, he was selected to be this year’s Typhoon Display pilot from a short list of highly-skilled instructors from 29 Squadron. When Adam is not displaying, he is teaching the next generation of front-line Typhoon pilots how to operate the jet.

The Eurofighter Typhoon has a top speed of more than 1400mph and is powered by two Rolls Royce engines, producing 40,000lbs of thrust.

This year Rich Goodwin will perform at the Blackpool Air Show in the highly-modified Pitts Special S2S, his ‘Muscle Biplane’.

The Muscle Biplanes are designed to provide the ultimate in spectacular aerial entertainment. The aircraft’s extensive modification programme has given this biplane unique capabilities, which allow Rich to perform an extraordinary brand of aerobatics including torque rolls, backwards flight and knife-edge flypasts.

Formerly known as the Breitling Wingwalkers, AeroSuperBatics are the world’s only professional formation wingwalking team.

This year, Kirsten Pobjoy and Emma Broadbent will perform on the top wings of beautiful 1940s Boeing Stearman biplanes, liveried in a striking orange, white and blue.

At the same time, the pilots will fly through a choreographed and energetic routine of dazzling aerobatics and close formation flypasts. These manoeuvres include loops, rolls, stall turns and inverted flight – all reaching speeds of up to 150 mph.

The powerful smoke system used in the display works by injecting environmentally-friendly smoke oil directly into the exhaust system.

The Strikemaster was built by the British Aircraft Corporation at Warton in Lancashire (now British Aerospace). It was a light ground attack export version of the Jet Provost and although it was never operated by the RAF it was used extensively by air forces as diverse as Ecuador, Oman and New Zealand.

The plane that will display at Blackpool belongs to Strikemaster Flying Club. It was imported from Oman and is in the immaculate grey camouflage colour scheme from its entry into service with the Royal Air Force of Oman.

The programme will also see displays by Chipmunk and Bulldog aircraft, as well as an L39 Albatros and an Autogyro (also known as a gyroplane). There will also be an appearance from a Spitfire V, the model that was adopted by Blackpool during World War II.