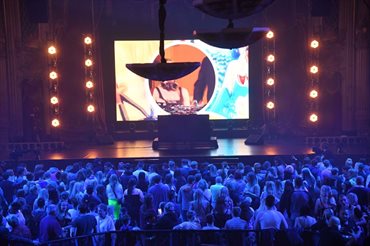 The countdown is on for the biggest night of Blackpool’s summer, the annual Illuminations Switch-On concert – and there is a chance for you to guarantee your place!

The final line-up for the concert in the famous Tower Ballroom on Friday 2 September is almost complete with confirmed performances by Blue, one of the UK’s most successful bands over the past two decades, singer-songwriter Tom Grennan and Mae Muller, one of music’s most exciting new talents. More talent will be announced over the coming days.

The concert, staged in association with MTV, will be followed by the official switch-on by legendary actor and comedian Johnny Vegas, triggering four months of Illuminations in the resort.

Whilst the 2,000 tickets for the show have been allocated by free ballot, a limited number of “golden tickets” have been set aside for people to guarantee their place in the ballroom.

The standing tickets, priced at just £10, will go on sale from 10am on Monday 8 August and will be sold on a first-come, first-served basis. To purchase, head to TicketSource.

The concert and Switch-On moment will also be live streamed to a global audience across MTV and VisitBlackpool channels, and event organisers are exploring the possibility of streaming the live event to an outdoor audience on the Tower Festival Headland.

2021 saw the Tower Festival Headland turned into an outdoor winter wonderland with skating rink, magic forest, snowfalls, log cabins and festive projection shows. We will be unwrapping our plans for the 2022 Christmas season in the coming months.

Mum rebuilds her life by starting a new business in Blackpool