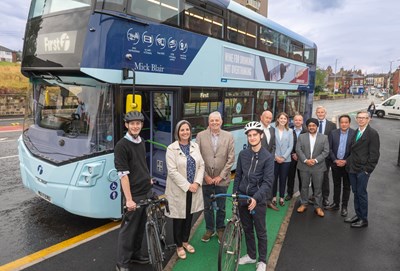 The A647 Stanningley Road bus infrastructure improvements to ease congestion in peak times along the Leeds to Bradford route is complete.

The A647 corridor highways infrastructure enhancements which have been delivered as part of the Leeds Public Transport Investment Programme to primarily improve public transport movements during peak travel periods in both directions between Leeds and Bradford are now complete.

After consulting on public transport, cycling and walking improvement plans along the route in 2018, Leeds City Council appointed BAM Nuttall to undertake further design, consultation and construction of the scheme. Responses to the second round of consultation were mainly positive, with respondents recognising the benefits of improving bus journeys, tackling congestion, and improving facilities for pedestrians and cyclists. Construction works then commenced in October 2020.

Improvements at the Ledgard way junction, also known as Mikes Carpets, have been a major intervention to allow more vehicles to pass through the junction and with safer facilities for pedestrians and cyclists. Several vehicles turning movements have been banned to offer more opportunity of green time for the A647 traffic movements, thus making the junction more efficient. In addition, smart technology has been included in the traffic signal operation which not only links the signals from the nearby junctions but is also capable of adjusting to traffic flows to ensure an optimum operation is achieved.

Cycle infrastructure in the area has been improved by adding links to the existing cycle superhighway over junctions to make cycle routes safer and more accessible. Pedestrians have additional walking routes and safer crossings along the route.

The key objective of the scheme is to reduce bus journey times between Leeds and Bradford by 7-8 minutes on average during peak periods. Though this will be formally monitored over the coming months, early feedback indicates significant improvements on bus journey times and reliability for the high frequency services.

First West Yorkshire has invested £8.1m in 28 new double-deck buses that will operate along the dedicated corridor on services X6 and 72. The buses are ultra-low emission with the best-forming diesel engines available and technology that reduces harmful pollutants such as nitrogen oxide (NOx) by up to 95 per cent. Carbon emissions are also reduced through the introduction of a lighter weight bus framework.

“I’d like to thank everybody for their patience during the construction along this corridor. Having had a tour of the improvements on one of First buses ultra-low emission buses, I am hopeful that residents who live on the corridor might choose the enhanced reliable bus service for their commute or travel into the city centre.

“A major investment of more than £180 million in bus services in Leeds to improve air quality was part of our ambition for corridor improvements on key routes into the city. By providing designated bus lanes, bus users will have the benefit of reduced journey times.

“All of the changes Connecting Leeds are making is a bid to make sustainable travel more appealing by improving public transport, walking and cycling connections and in turn contributing towards tackling the climate emergency.”

“This is a heavily-used route for customers travelling with us from communities to the west of the city into the heart of Leeds.

“They will now begin to enjoy quicker and more reliable journey times, thanks to the bus priority measures that have been introduced. We hope these will encourage more people to consider using the bus and leaving their car at home, which can help to reduce congestion for all road users and create better air quality.

“The completion of these works is further evidence of the strong relationship with bus operators and partners in the Connecting Leeds programme to improve travel throughout the city.”

“BAM are once again delighted to play our part in successfully delivering another vital piece of highways infrastructure for Leeds City Council. Our design and construction team has worked collaboratively, to help the council deliver on their wider transport aspirations for this great city.”

Leeds flies the flag as a Tree City of the World