The yearly event is organised by the award-winning, official charity of Burnley Football Club to present end-of-season awards and to celebrate the Shadow Youth Team (SYT) and Post 16 Girls Academy (P16G) successes and the various teams’ achievements on and off the pitch.

Among the success stories showcased were the three SYT students, Jack Oliver, Owen Anforth, and Oliver Stephenson who all secured scholarships to study and play football in the USA.

“Our students’ determination and grit has shown and will continue to show as they work towards their own personal achievements.”

The programme gives talented young players between the ages of 16 and 18 the chance to combine academic studies with practical football experience and is designed to bridge the gap between grassroots and academy football.

Moreover, Nathan went on to say: “We believe in the immense power of our football club to transform people’s lives for the better.

“We work hard every day to deliver our mission across the communities of Burnley, Pendle, Rossendale, the Ribble Valley, and West Yorkshire to inspire, support, and deliver positive change for all and is something we strive to implement on our football and education programmes.

“We are immensely proud of all those on the programme and want to wish the very best to those who secured USA scholarships and those progressing onto higher education.”

“For any young person interested in getting involved, we have six male teams and one female team that make up our Shadow Youth Team as well as a post-16 girls’ programme. Students do not need to be studying sport courses to be a part of the team.”

“The programme helps develop students knowledge of the game whilst also providing the opportunity to potentially play at a professional level. We believe in offering a programme that can help students develop on the pitch and in the classroom, whilst helping them to achieve their academic ambitions.”

“For those who might be interested and are Clarets-mad, students can also expect to receive a free Burnley FC Training kit, play in the official Burnley FC home and away kits, and have their photos taken at Turf Moor!”

For more information about the Shadow Youth Team click here. 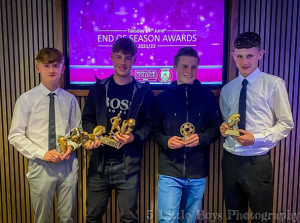 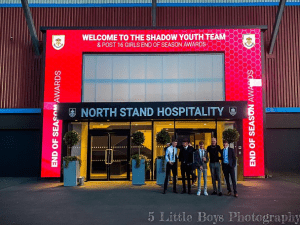 The full list of 2022 award winners is presented below:

Clubman of the Year- Tom Clamp

Goal of the Season- Reece Miller

Performance of the Season- Jack Day

Clubman of the Year- Owen Anderson

Goal of the Season- Lucas Robinson

Performance of the Season- Lucas Robinson

Clubman of the Year- Nathan Hartley

Goal of the Season- Isaac Williams

Performance of the Season- Cain Fallows

Clubman of the Year- Daniel

Performance of the Season- Bruno Monterio

Goal of the Season- Ellie Stuart

Top Tips for a Great CV!

An exclusive interview with our Alumni Kimberley Kay