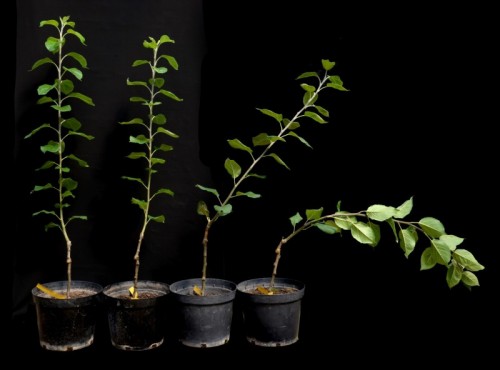 Apple trees respond to a common viral infection by targeting a gene in the same pathway that genetic scientists are aiming at, find scientists from The University of Manchester

The discovery published in Current Biology shows that the fruit trees, which develop rubbery branches when infected, mirrors how scientists are trying to  genetically modify trees.

However, an extensive survey in the UK during the 1950s when ARWV was widespread revealed that in some cases, over 50% of apple trees sampled were infected with the virus

The widespread  presence of the virus  across the globe is well documented.

Though their branches become more flexible, no adverse effects to humans who have eaten fruit from the infected trees have been recorded and there have been no adverse environmental consequences..

Funded by the Leverhulme Trust, the study also provides important insight into how scientists might one day be able to process woody plant tissue so that it efficiently produces sugars needed for biofuels.

Woody plant material represents a vast renewable resource that has the potential to produce biofuels and other chemicals with more favourable net carbon dioxide emissions.

However, scientists haven’t yet worked out an efficient way to release its substantial store of sugars estimated to be at around 70%.

The scientific team showed  that the symptoms of ARWV infections arise from a reduction in  lignin – a complex organic polymer that forms key structural material supporting the tissues of most plants.

Using next generation sequencing (NGS)  to analysis the expression of all the genes in the rubbery apple tree branches, they discovered that phenylalanine ammonia lyase (PAL), an enzyme responsible for lignin biosynthesis was suppressed.by the plant in response to the infection

The response to ARWV infection results in the plant generating a multiple ‘small interfering RNAs, known as (vasiRNAs)

The vasiRNAs then target several of the plants own genes to be downregulated-  or degraded-   in what is assumed to be part of an antiviral defence response.