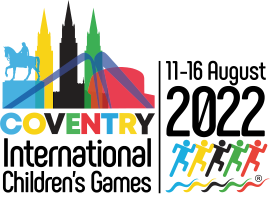 The International Children’s Games 2022 (ICG) start this week with the opening ceremony due to take place on Friday 12 August, and the Games set to run from Saturday 13 – Monday 15 August.

The opening ceremony which is a private event, will see 73 teams of athletes aged 12 – 15 years old, from 31 countries, welcomed into Coventry as the host city for this year’s Games.


In the days following the ceremony, over 1,500 athletes will be competing in seven different sports to take home medals for their city. The sports covered in the International Olympic Committee sanctioned event are 3 x 3 basketball, athletics, climbing, football, swimming, table tennis and tennis, with para-sport competitions included.

Competitions will take place at The Alan Higgs Centre, Broadgate, University of Warwick and Coventry University. Members of the public are invited to spectate at any of the sports competitions and are able to turn up and watch without tickets.

Councillor Abdul Salam Khan, Deputy Leader, Coventry City Council, said: “We are elated to be hosting this year’s International Children’s Games – especially so soon after a fantastic Commonwealth Games in the region.

“The young athletes taking part will hugely benefit from this. Not only the buzz in the air and the spotlight on sport, but the athletes are staying in the same accommodation as the Commonwealth Games athletes did and are even using some of the same kit.

“The basketball 3 x 3 equipment is what was used in the Commonwealth Games, and it’s fantastic that our ICG athletes get to use this.

“As we come to the end of what has been a fantastic summer of sport, I encourage residents of Coventry to head to the ICG sports venues to support these young athletes.”


On Friday 12 August, roads in the city centre will be affected by the opening ceremony procession. From 6.45pm Bayley Lane will be closed at its junction with Earl Street and Cuckoo Lane. Once the procession is ready to cross Earl Street, STOP boards will be in place to allow a safe crossing.

Coventry residents got the chance to jump in the boxing ring with Olympic Gold medallist Galal Yafai MBE, as part of a jobs fair.

National adoption week – connecting with your past – Coventry City Council