The ‘topping out’ is complete on a new multi-million Breast Care Centre under construction at Ipswich Hospital.

Teams have laid the final roof tile which marks a major milestone in the building project. Work now begins inside with vigour with the specialist NHS centre due to open for patients this winter. 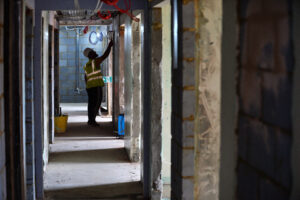 The new facility will transform the experience patients have when they come to hospital by bringing all elements of breast care under one roof – the clinic, the imaging department and hospital breast screening.

He said: “This new centre will transform hospital visits for breast care patients. The care our clinical teams give to patients is outstanding and now we can provide an environment to match.” 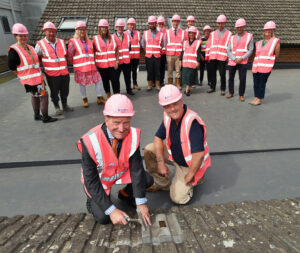 The number of patients needing breast care is on the rise but at Ipswich Hospital there isn’t a dedicated clinic. The breast care team shares clinic space with other clinical departments so it isn’t tailored to breast care.

The new centre will create this dedicated space and will also bring hospital breast screening and breast imaging under the same roof. Patients will no longer need to walk backwards and forwards between the departments as they do now, often needing to get dressed and undressed again and spend a long time in waiting rooms.

Paul Fenton, Director of Estates and Facilities at ESNEFT, said: “Topping out is a day to celebrate as we move ever closer to opening this new centre. The building will be fit to house state-of-the-art healthcare and will make a huge difference to our patients.” 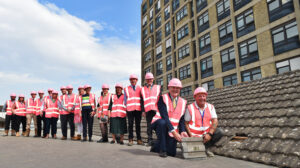 The new centre, an investment of £5.3million, is a partnership between NHS funding from ESNEFT and a fundraising appeal called the Blossom Appeal by Colchester & Ipswich Hospitals Charity. A fundraising abseil event at the hospital last month has raised a whopping £93,000.

The Breast Care Centre will in the central outpatients’ area of the hospital. 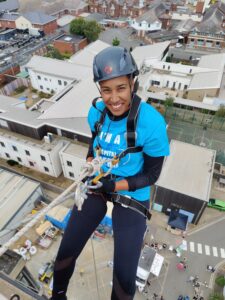 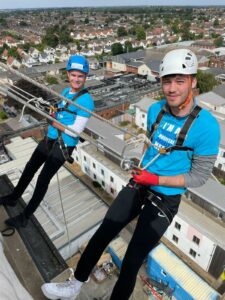 Fundraising from a weekend of abseiling at the Ipswich Hospital’s 130ft maternity block has raised a whopping £93,000 for the Blossom Appeal.

220 local people took part in the abseil last month. Among them was Chief Executive of the hospital Nick Hulme.

Mandy Jordan, associate director of Colchester & Ipswich Hospitals Charity, said: “All the money donated through the charity will go towards making the Breast Care Centre exceptional. There will be extra equipment, artwork and peaceful indoor spaces and gardens.

“We want to thank all the fundraisers and donors who have supported the Blossom Appeal so far, as well as rallying local people to get involved and help us raise the final £400,000 needed.”

The abseil event also raised £2,000 for other departments at the hospital.

“I deteriorated so quickly – it was very scary”