Blackpool Illuminations Switch-On to be live-streamed on outdoor screen 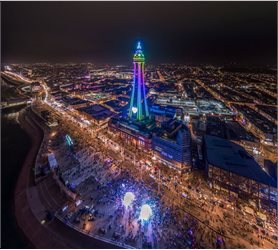 The biggest night in Blackpool’s events calendar will be shown on a giant screen on The Promenade, organisers revealed today.

The annual Blackpool Illuminations Switch-On concert, which is being staged in association with MTV in the famous Tower Ballroom on Friday 2 September, will be live-streamed on a specially-erected screen on the nearby Tower Festival Headland.

It had already been announced that the concert and Switch-On moment would be streamed to a global audience via VisitBlackpool and MTV channels. Last year, that attracted more than 160,000 views from as far afield as Australia, Canada and the United States.

The concert, which will be hosted by Becca Dudley, will include performances by Blue, Tom Grennan, Mae Muller, Fuse ODG and Nina Nesbitt. It will then be followed by the official switch-on, triggering four months of Illuminations in the resort.

Almost 2,000 tickets for the show were issued via a free ballot that attracted tens of thousands of applications.

“As always, there has been an overwhelming demand for tickets for the annual Switch-On concert. Over the past two years, we have been able to give people who couldn’t get tickets the opportunity to watch the show and Switch-On moment in their own homes via a live stream.

“This year, we are delighted to be able to announce that there will also be an opportunity for residents and visitors to join in the party atmosphere with that live stream being shown on the headland opposite The Blackpool Tower.

“Last year, thousands of people turned out on that headland just to see the lights come on. The screening of the show will give them the chance to be part of what is a uniquely special occasion.”

Full timings and details of the Illuminations Switch-On event

The 2022 Blackpool Illuminations have once again been extended by two months and will shine each night from September 2 to January 2, 2023. For Switch-On times and full details of this year’s display.

Twice weekly testing now available to everyone in Blackpool