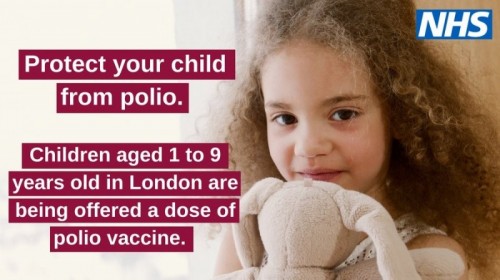 The government has announced that all children in London aged one to nine will be offered a polio booster vaccination over the coming weeks, following a discovery of poliovirus in sewage in north and east London.

The announcement comes following a recommendation from the Joint Committee on Vaccination and Immunisation (JCVI) after further sewage sampling identified eight London boroughs, including Hackney as areas with higher-than-normal levels of polio.

A targeted inactivated polio vaccine (IPV) booster dose will be offered to all children in London between the ages of 1 and 9 to ensure a high level of protection from polio, which can cause paralysis in the worst cases, and to help reduce further spread of the virus.

The NHS will soon be in touch with parents across London if their child is within this age group, to tell them how and when they will be able to get their vaccination.

Meanwhile, parents of children who have fallen behind with their routine programme of vaccinations (including the first and second doses of the initial polio vaccine, but not including the polio booster), should urgently get in contact with their GP so that they can get protected as soon as possible.

However, parents are asked not to contact health services about polio boosters at this stage, as staff are very busy setting up this vaccination programme.