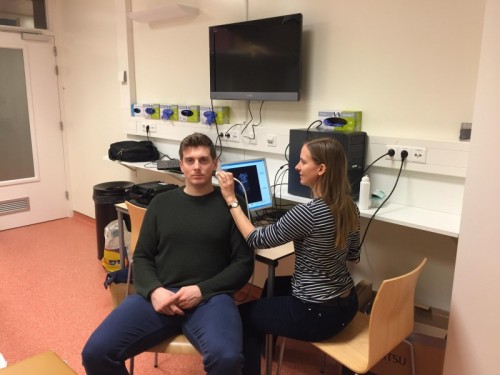 Adam van Casteren, an evolutionary biomechanist from The University of Manchester was the lead author on the study collaborating with scientists from the Max Planck Institute for Evolutionary Anthropology (Germany), The University of Chile (Chile) as well as Maastricht University Medical Centre and Leiden University (the Netherlands).

He said: “We are the first to demonstrate that the energy expended in human chewing is substantial and that the harder the material which is chewed, the higher the impact on the metabolic costs.

“We believe the need to extract maximal energy from food sources without wasting it on processing costs, could be one of the driving forces behind the evolution of mammalian mastication.”

“That is because in some foods, nutrients are not readily available and the ability to chew effectively is probably vital for any animals’ survival.”

He added: “For modern humans, it is likely that mastication represents a small part of the daily energy budget.

“But before the onset of cooking and sophisticated food processing methods, when food needed to be chewed for much longer, the costs to our ancestors have likely been relatively high.”

“This research brings a novel energetic dimension to the interpretation of early human dentofacial fossils.”

Case study: the energy cost of chewing to great apes

Chimpanzees consume raw meat at an estimated 400 kcal/hour and orangutans at a substantially slower rate of 185 kcal/hour (44, 45).

If we assume that chewing meat exerts a similar energic cost to the stiffer gum, then chewing meat would cost 9.2 kcal/hour.

This would result in a 2.3% reduction in energy gained from meat per hour for chimpanzees and a 5.0% decrease in the case of the orangutan.

These numbers are speculative, but given the high mechanical challenge provided by the connecting tissues of actual meat, they are likely to be conservative.

Image 1: The ventilated hood system at Maastricht University used to measure oxygen consumed and carbon dioxide produced during activities such as chewing.

Image 2: Measuring the chewing muscles with an ultrasound wand.

the economic tactics that drive Liverpool and Real Madrid