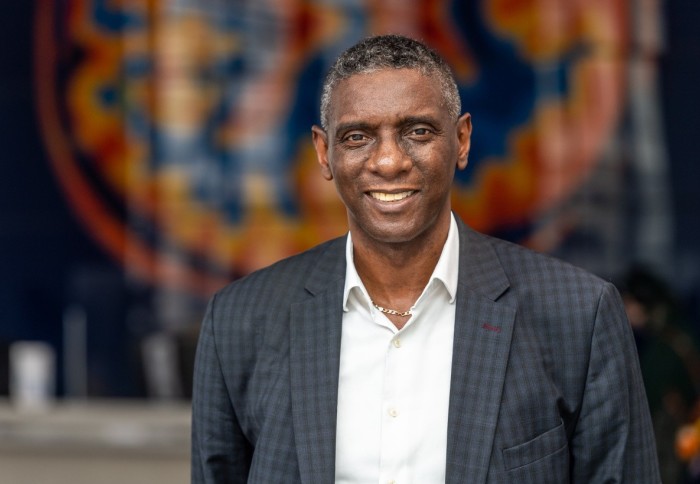 Dr Mark Richards is recognised in the Royal Society’s annual awards for his commitment to increasing equity in physics.

Dr Richards has been awarded the first ever Royal Society Research Culture Award, which will now be given annually to an individual or team for outstanding and sustained work in the improvement of the research system/research culture.

He was cited for “his inspiring contribution to, advocacy of, and commitment to increasing equity in physics, including the development of the UK’s first network of Black physicists: the Blackett Lab Family.”

Dr Richards completed his PhD in Physics at Imperial and joined the High Energy Physics group in 2002. His work using spectroscopic techniques to detect chemicals in the air led to spin-out company Duvas Technologies, which specialises in wireless air sensing networks for real-time pollution monitoring and mapping.

Dr Richards is now Head of Outreach and Deputy Admissions Tutor for the Department of Physics, and Principle Investigator for the Strengthening Learning Communities Project. Launched in 2021, the Project aims to research attainment gaps and implement strategies to improve the university experience for all students and ensure parity for all.

He also founded the Blackett Lab Family – a UK-wide network for Black physicists aiming to diversify perceptions of physics and promote Black representation at all levels in the field. The initiative began in 2006 when Dr Richards took on mentorship of two Black physics students, growing to a now national collective.

In 2019, Dr Richards was elected a Fellow of the City & Guilds Institute of London in recognition of ‘unwavering support to education and training of young people’ and in 2022 he received the President’s Award for Excellence in Culture and Community.

On this latest award, Dr Richards said: “I am honoured and humbled to receive a prize of this nature. On a personal level, it acts as recognition at the highest level, of over 20 years of dedication and commitment to help inspire scientists from underrepresented groups, in whatever way I can, to both achieve their potential and to also support others in their journey along the way.

“It’s also validation that this work is important to scientific research, as it serves to contribute to the long-term scientific output through laying the foundations for others to excel. Finally, the prize will act as rocket fuel to continue and broaden the scope of my work in this area.”

Professor Iain McCulloch, a Visiting Professor in the Department of Chemistry, receives the Armourers and Brasiers Company Prize. Now primarily based at the University of Oxford, Professor McCulloch completed much of his prizewinning work at Imperial.

He is cited for “making fundamental contributions to the application of materials chemistry to organic electronic applications, with an applied, results-oriented focus, always demonstrating translational impact and commercial potential.”