Rugby League World Cup 2021 is celebrating 50 days to go until the biggest, best and most inclusive tournament kicks off at St James’ Park in Newcastle as hosts England welcome Samoa men on 15 October. 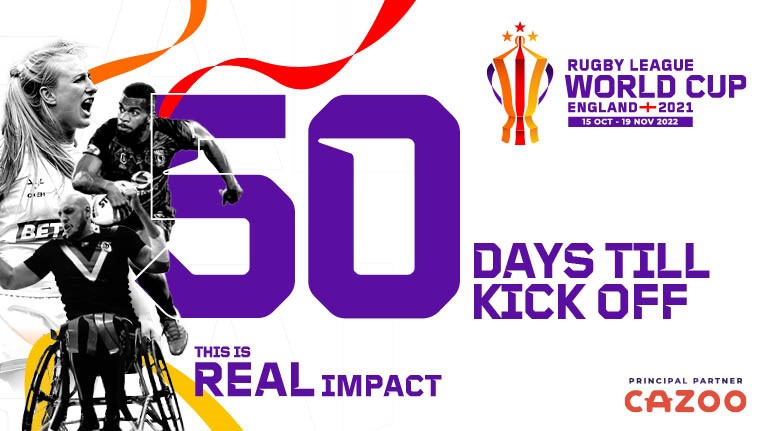 Doncaster itself is keenly counting down the days to the rearranged 2021 Rugby League World Cup.

It is now just 50 days until the tournament begins and world class sport will finally be on show in the city during October.

The city will also be a team base for Samoa’s men’s team.

All 61 matches will be played at venues across England between 15 October and 19 November.

Having submitted its bid to be a host venue in July 2018, Doncaster has since welcomed the historic ‘Paul Barrière Trophy’ to the city and involved thousands of school aged children across the borough in legacy activities.

Doncaster Mayor, Ros Jones, said: “We’ve seen this summer of sport inspire the nation and it’s now up to Doncaster as one of the host cities of the Rugby League World Cup to pick up the baton and help deliver a truly world class tournament. We cannot wait to welcome the Samoa team to their base and host 3 top quality games. With only 50 days to go, we’re really excited to see local schools, businesses and residents get on board with the festivities and secure their tickets ahead of the big kick off.”

Doncaster Rugby League Chief Executive, Carl Hall, said: “What a fantastic summer of sport we have witnessed so far, and the Rugby League World Cup is going to be the best of them all, with just 50 days to go I can already see the excitement building around our fantastic city of Doncaster. The incredible work that our team have put in over the last couple of years is now beginning to bear fruit as we ready ourselves to host the fastest, most exciting, thrilling sporting tournament you will ever see. We cannot wait to welcome you all to Doncaster and the Eco-Power Stadium this October.”

Rugby League World Cup 2021 Chief Executive, Jon Dutton, said: “Tickets for all of the tournament fixtures are selling very well, with the tournament opener between England and Samoa on course to sell out and we are expecting a fantastic atmosphere at St James’ Park. The opening weekend of the tournament is set to be a true festival of rugby league and will provide real momentum for 61 matches which will culminate with all three finals being held in Manchester over the 18 and 19 November. We saw with the Women’s Euro’s how the country really got behind the tournament after England’s women got off to such a great start and with all three of our England teams in with a great chance of progressing to their respective finals the tournament will only get more exciting as we build towards that finals weekend in Manchester.”

50 days to go also marked the beginning of The National Lottery Trophies Tour which will see the tournament’s three trophies travel across the country visiting the host towns and cities which will play a crucial role in delivering all 61 matches before finishing back in Newcastle ahead of the opening game.

As well as visiting key venues and communities, The National Lottery Trophies Tour will also take in Super League, Championship and League One clubs and a variety of other exciting events throughout the 50 days.

Do you provide a caring role for family, friend or a neighbour?