A century-old ship from Norway will be docking in Hartlepool next summer as the Borough hosts the world-famous Tall Ships’ Race.

The 107-year-old Statsraad Lehmkuhl was built as a training ship for the German merchant marine under the name Grossherzog Friedrich August, before being transferred to the United Kingdom as part of the war reparations in 1920. 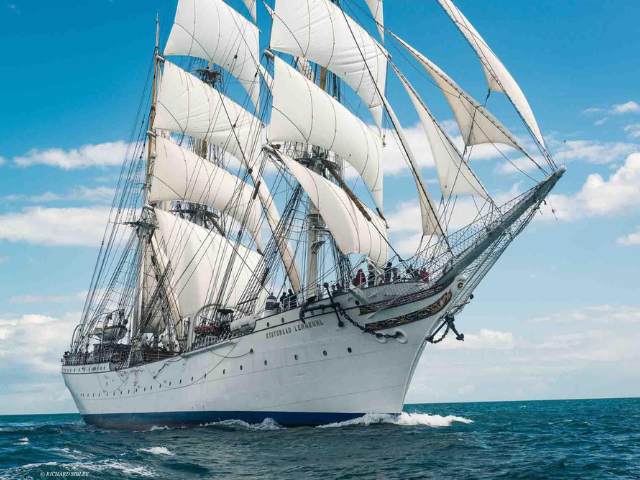 In 1921 she was bought by former Norwegian cabinet minister Kristofer Lehmkuhl.

She was briefly captured by German forces during the Second World War, following which she returned to work as a training vessel in Norway.

Councillor Shane Moore, Leader of Hartlepool Borough Council, said: “With a length of nearly 100 metres, the impressive three-masted Statsraad Lehmkuhl is an absolutely stunning ship and I can’t wait to see her in Hartlepool.

“She’s such a majestic ship and our first Class A vessel to sign up for Tall Ships Hartlepool 2023 – this means she’s in the largest category of tall ships.”

With the prestigious Tall Ships Hartlepool 2023 now less than one year away, officials are keen to ensure that local people and businesses know how they can get involved.

The event will take place from Thursday 6 July to Sunday 9 July 2023, and bring with it a range of opportunities, including becoming a Sail Trainee aboard a participating vessel, a volunteer or a sponsor.

Businesses can also register their interest in having a presence at the event, and this may be in the form of an exhibition stand, a stall, a catering concession or even as an artist.

Catherine Honey, Hartlepool Borough Council’s Event Director Tall Ships 2023, said: “We would love to hear from the community and businesses on how they would like to be involved in this exciting event. There is now less than one year to go and we are encouraging the town to get in touch and be part of it!

“We are asking for expressions of interest and this can be done by submitting an online form available at www.tallshipshartlepool2023.co.uk

“Once we receive your expression of interest, we will contact you later in the year to provide more information about the opportunities available.”