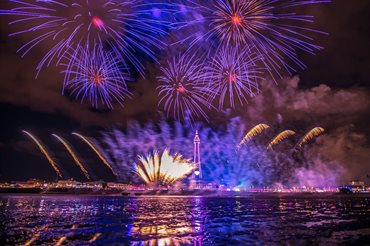 Fireworks over The Blackpool Tower

The nations who will compete in this year’s World Fireworks Championship Blackpool have been revealed.

Finland, Barbados and Wales will battle it out over three alternate Saturdays in September and October.

The World Fireworks Championship Blackpool is one of the resort’s most spectacular events, with the fireworks being launched from the beach in front of The Blackpool Tower.

This year’s event brings three new competitors to the stage:

Week One (Saturday 17 September) will see the Fireworks Factory from Finland kick-start the competition. The company have been operating in the events industry for almost 20 years and have fired shows all around the world.

On their home territory, they have been responsible for shows at the Olympic Stadium and numerous summer festivals.

A spokesperson for Fireworks Factory said:

“This will be the first year that a company from Finland has been represented in Blackpool and we are looking forward to bringing our unique style to the crowds on the promenade.”

Week Two (Saturday 1 October) will see Caribe Fire FX represent the Caribbean island of Barbados. The company have staged celebrations large and small from weddings on the beach to Havana’s 500th anniversary.

“The islands of the Caribbean are famous for the white sandy beaches, turquoise waters, reggae music and swaying palm trees. But we have been adding our own small contribution to the magic of the Caribbean since 2006 and are looking forward to sharing it.”

Week Three (Saturday 15 October) will see Celtic Fireworks represent the home nation of Wales. Founded in in 2004, the company has become one of the largest importers of fireworks in the UK and has experience of working all across the globe on events including the Olympic Games, Saudi National Day and Bastille celebrations.

“We are proud to attend the Blackpool World Fireworks Championship to showcase the vast range of product that we import from Europe and China.

“We have chosen a mixed sound track with a nod to our Welsh heritage. We are particularly excited to showcase some of our new product for 2022, which includes some stunning new effects and colours.”

A fourth fireworks event, which will be a showcase event as part of the Coral Island sponsorship, will take place on Friday 28 October, providing a stunning finale to mark the end of the October half-term school holidays.

A spokesperson for Coral Island added:

“We are delighted to be bringing the spark to Blackpool – working in partnership once again with Visitblackpool on one of the most exciting events for the 2022 season. As one of Blackpool’s largest family venues Coral Island are proud to support the local community to ensure fantastic events like the World Fireworks Championship Blackpool can take place. We look forward to giving everyone a chance to be part of the action in Blackpool with Coral Island.”

Check out start times and any further updates.

The four firework displays form an integral part of Blackpool’s major events programme. These include:

The annual Blackpool Illuminations have once again been extended by two months running nightly from September 2, 2022 to January 2, 2023. This year’s display includes a reimagining of the stretch of lights on the famous Golden Mile by TV star and designer Laurence Llewelyn-Bowen.

Check out the website for start times and more details.