Psoriasis diagnoses in primary care delayed by up to five years 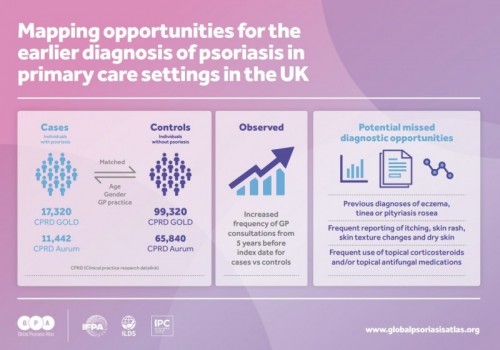 The researchers carried out extensive analysis of electronic health records from more than 700 general practices between 2010 and 2017 across the UK, comparing clinical diagnoses and treatments between people with and without psoriasis.

They repeated the analysis with 11,442 cases and 65,840 controls extracted from a second database called Clinical Practice Research Datalink Aurum – with similar results.

Patients with psoriasis were up to eight-times more likely than those without psoriasis to be diagnosed with pityriasis rosea – a minor skin condition -at six months before the diagnosis of psoriasis, they found.

They were twice as likely to be diagnosed with eczema or tinea corporis – a fungal skin infection – one year before diagnosis.

They were also more likely to report symptoms of psoriasis such as dry skin, rash, skin texture changes and itching than controls up to five years before diagnosis.

And they were prescribed topical corticosteroids or topical antifungals in the year before diagnosis twice as often as those without psoriasis.

GPA Director, Chris Griffiths is Emeritus Professor of Dermatology at The University of Manchester, Head of the Dermatology Theme at the NIHR Manchester Biomedical Research Centre and Honorary Consultant Dermatologist at Salford Royal NHS Foundation Trust.

He added: “Psoriasis is long-term disease affecting around 3% of people in the UK, which substantially affects their quality of life and is linked with other serious medical conditions such as arthritis, heart disease and depression.

“The findings from this study suggest the diagnosis of psoriasis may be missed or delayed by up to five years for some individuals hence leading to a potentially detrimental delay in establishing an appropriate treatment regimen.

“It is crucial that diagnosis and treatment start as soon as possible, if patients are to reduce the risk of life-long impairment.”