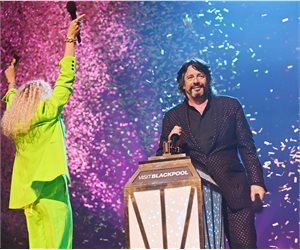 TV celebrity and designer Laurence Llewelyn-Bowen brought a dash of showbiz razzmatazz to Blackpool as he switched on the resort’s famous Illuminations.

The star of Channel 4’s Changing Rooms pulled the switch at the end of a 90-minute live concert in the Blackpool Tower Ballroom produced in association with MTV and featuring Blue, Tom Grennan, Nina Nesbitt, Fuse ODG and Mae Muller

Crowds who had gathered on the Promenade to watch the show on a giant screen were treated to a burst of fireworks and a spectacular light show on The Blackpool Tower to mark the start of four months of Illuminations.

Laurence had earlier told the show’s host Becca Dudley of his love and affection for the Illuminations and his pride at being invited to perform the Switch-On ceremony.

Over the past few years, Laurence has collaborated with the Illuminations production team, designing a number of spectacular features and installations.

His appearance as Switch-On star this year coincides with the unveiling of a dazzling makeover for the Golden Mile in which Laurence has created a stretch of Art Deco-style features that will celebrate a golden age of 1930s glamour.

“We are delighted to add Laurence’s name to the list of celebrities who have turned on the Illuminations down the years. He is one of our greatest ambassadors.

“It was also great to be able to share the concert and Switch-On moment with residents and visitors who gathered on the Promenade and with a worldwide audience via the live stream. Nights like Switch-On are what make Blackpool such a special place.”

The concert and Switch-On moment were streamed to a global audience via VisitBlackpool and MTV channels. Last year, that attracted viewers from as far afield as Australia, Canada and the United States. It was also live-streamed on a specially-erected screen on the nearby Tower Festival Headland.

The stream will be available for viewing until 7.30pm on Sunday 4 September at

The 2022 Blackpool Illuminations have once again been extended by two months and will shine each night from September 2 to January 2, 2023. For Switch-On times and full details of this year’s display including the free nightly projection shows on The Blackpool Tower, go to: www.visitblackpool.com/illuminations

The Illuminations remain one of the UK’s most endearing and enduring tourist attractions, having shone for more than a century.

Blackpool was one of the first of 101 towns in the UK to secure funding from the Government’s £3.6bn Towns Fund. With the help of this support, funds were allocated to upgrade the Blackpool Illuminations to attract additional visitors by developing new features and lighting technology.

Other features to be unveiled during this year’s Illuminations season and associated Lightpool Festival (which runs from October 14-29) include the biggest ever standalone installation, Odyssey, which has been co-created by international designer Jack Irving and a team from Lancaster University. Details of the Odyssey unveiling will be announced in the coming weeks.

The new Beachside Boulevard is a seaside-themed roadside section featuring brightly lit neon sandcastles and multi-coloured waves. Keeping to the seaside theme, watch out for two giant pixelated beach balls on the Tower Festival Headland, each standing more than seven metres tall and providing a spectacular walk-through experience and a giant ice-cream specially created for selfies!

Get a Covid test to protect yourself and your loved ones