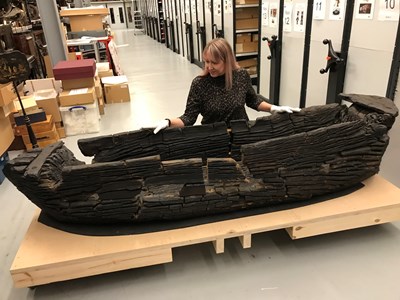 A reconstructed medieval boat which was blown to pieces during a Second World War air raid is embarking on a new adventure in Leeds.

Visitors to Leeds Discovery Centre will get a better chance to see the centuries-old carved logboat, which dates from the 1300s, following a painstaking conservation and research project which will help tell its fascinating story.

The historic wooden watercraft had lain beneath the soil for more than 500 years before being discovered by Joseph Taylor in 1863 while he was digging some drainage works near Giggleswick Tarn in North Yorkshire.

His remarkable find was subsequently donated to Leeds Museum, then located on Park Row, where it was displayed for decades as part of a spectacular collection.

But on the evening of March 16, 1941, the building suffered a direct hit during an air raid which devastated large parts of the museum and its thousands of artefacts.

The logboat itself was sadly shattered into 45 pieces and experts carefully sifted through the debris before wrapping its remains in sheets of the News Chronicle and storing them in a crate.

It wasn’t until 1974 that those fragments were re-examined with a view to reconstructing the vessel. The pieces were sent down to the National Maritime Museum at Greenwich where they were researched, conserved and partially re-assembled.

The research at Greenwich revealed that the boat was crafted from a single ash tree in around 1335 AD. Designed to carry one person sitting on the D-shaped board, the boat was propelled with a paddle and was probably used to fish from the tarn or to transport materials.

It returned to Leeds in 1988 and has been housed at the Leeds Discovery Centre, Leeds Museums and Galleries’ state-of-the-art storage facility.

Over the past few months, experts have been preparing the boat to go on display once again, complete with a new, moveable plinth that will allow it to be moved and viewed without touching it.

The new display will also see the vessel’s long side panels, which would have been used to stop water overflowing from the sides into the boat, put back into place in future so visitors can see how the boat would have looked hundreds of years ago.

Kat Baxter, Leeds Museums and Galleries curator of archaeology, said: “This remarkable vessel survived more than half a millennium buried underground before being all but destroyed by an air raid which devastated the museum and its collection.

“To see it today, preserved and reassembled in such incredible condition is a humbling experience which really brings home the centuries of history which are all around us and beneath our feet.

“Once it’s on display, the boat will allow our visitors to find out more about the legacy and craftwork shaped by the hands of our ancestors and to imagine what life was like for the person who once sat inside it centuries ago and fished in the waters of Yorkshire.”

The Leeds Discovery Centre is home to more than a million objects and is used to store parts of the Leeds collection which are not currently on display, which span tens of millions of years of world history.

Councillor Jonathan Pryor, Leeds City Council’s executive member for economy, culture and education, said: “Our museums and galleries team do in incredible job protecting a spectacular array of objects and artefacts telling the story of our planet and its history.

“It’s a credit to them that hundreds of thousands of visitors each year get to learn about and be inspired by the collection and to discover so much about the world around us.”

The Leeds Discovery Centre is free to visit by appointment. For more details on how to book, visit:  https://museumsandgalleries.leeds.gov.uk/leeds-discovery-centre