Thanks to money raised by you – our amazing community – a huge delivery of vital first aid kits have arrived in war-torn Ukraine. 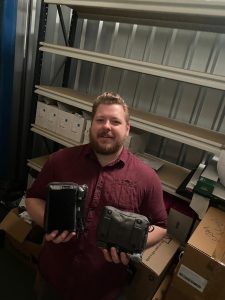 Earlier this year, the fundraising team at North Tees and Hartlepool NHS Foundation Trust launched a campaign to help people in Ukraine impacted by Russia’s invasion.

Partnering up with Vladyslav Vovk, one of the Trust’s foundation doctors, as well other medics and health trusts across the region, more than £25,000 has been raised.

So far, this has been invested in more than 170 individual first aid kits – which have now arrived in Mykolaiv, in the south of the country – after the Trust enquired about goods needed on the frontline. 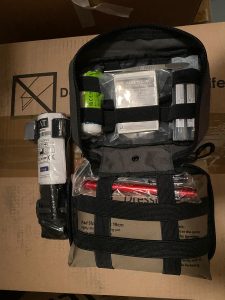 This is the second delivery the organisation has made to Ukraine – following a collection of a range of medical supplies organised by the Trust’s subsidiary company, NTH Solutions.

“I can’t thank people enough for all of their support. These kits contain everything needed for life saving critical care on the battlefield.” 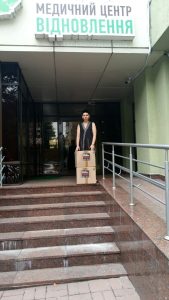 Working with the Trust’s fundraising service and the communications and marketing team, the organisation’s staff and community have also helped raise a huge haul of goods over the last few months.

This includes tinned food, toiletries and clothing to go to innocent civilians and refugees.

Vlad added: “The staff and community have shown such kindness and selflessness over the last few months.

“It’s incredible and I just want to thank each and every one of you.”

It’s the latest in many acts of generosity shown by the organisation and its community since the war began.

Earlier this year the Trust told the story of hospital porter Paul Simms – both Paul and his wife Gill opened up their home to a mother and daughter fleeing the Ukraine.

Suzi Campbell, fundraising co-ordinator, said: “The generosity of our workforce and our community over the last few months has been so humbling.

“We’ve given medical equipment, food and clothing supplies to people and even had staff who have offered a home to refugees.

“It’s so inspiring and I want to thank everyone who has offered their help and support.”