On Saturday 10th September, more than 250 former students of Bedford Physical Training College (1903-1952) – later known as the Bedford College of Physical Education (1952-1978) – were reunited and awarded honorary degrees by the University of Bedfordshire. 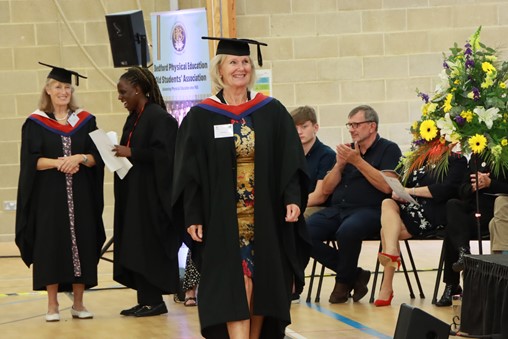 Now aged in their 60s, 70s, 80s and 90s, graduates who studied at the College between 1940 and 1978 were invited to attend two special ceremonies hosted at the Bedford campus on Polhill Avenue to celebrate their achievements, including their global contributions to Physical Education (PE), sport and life-long learning through physical activity.

The College was founded in 1903 as a specialist PE college for female students, during a time when women were not encouraged to take up a profession. Those who completed the three-year course at the College received a Certificate of Education (or equivalent), as PE was not recognised at degree-level in the UK at the time.

Most of the former students contributed significantly to the teaching of Physical Education in schools, universities and local communities over the decades. Many have risen to challenges in diverse fields and achieved civic recognitions, as well as contributing to national and international government policy. A great number have also represented their country in a variety of sports. 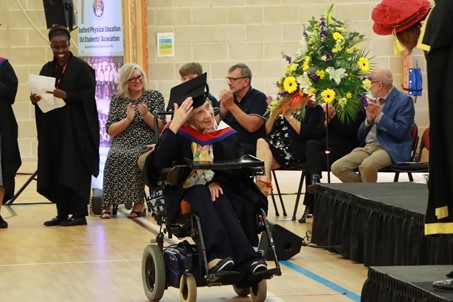 Following a proposal submitted by Margaret Peggie OBE, the Honorary Vice President of the Sport & Recreation Alliance, and Jackie Gregory – both former students (1961-1964) and members of the Bedford Physical Education Old Students’ Association (BPEOSA) – over 250 women, including themselves, were awarded honorary degrees by the University to continue to build on the legacy of the College.

Jan Schofield, President of BPEOSA, commented: “There are no words to describe the joy of so many former students being acknowledged for the quality of their training and teaching. Several posthumous awards were also presented, including to Pat Bowen-West, our former College Principal and Association President. It was a momentous day in the calendar of the 120 years of Bedford’s Physical Education history.”

After being welcomed into the venue by a traditional piper, a two minute silence was held before the start of each ceremony in remembrance of Her Majesty Queen Elizabeth II. Professor Rebecca Bunting, Vice Chancellor, opened the ceremonies and Juliet Fern, Executive Dean of Bedfordshire’s Faculty of Education, English & Sport, announced the recipients – all proudly dressed in graduation gowns and mortar boards – who then processed in front of the ceremonial stage.

Aged 100, Hilda Moore – who played hockey for England in 1947 and who trained under the College’s founder, Margaret Stansfeld – is believed to have become the oldest living recipient of an honorary degree. 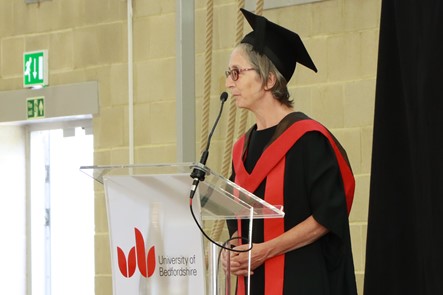 During the ceremonies, speeches were delivered by a number of distinguished guests, including BPEOSA-friend, Professor Helen Pankhurst CBE – the granddaughter of Sylvia and great granddaughter of Emmeline Pankhurst, leaders of the British suffragette movement.

A University of Bedfordshire alumna, Daisy Perry – who recently graduated in Physical Education (Secondary) and is a BPEOSA Committee member – addressed the room, offering her perspective on the occasion and reflections on her teacher training course.

Following each ceremony, graduates and their guests were able to catch up with their College peers – some of whom had travelled overseas for the occasion – while enjoying a lunch reception held on campus.

Juliet Fern said: “It was a privilege to be part of this event, which has recognised the collective and individual achievements of those awarded. It has given pleasure to so many people, with many commenting that the experience has been a dream come true.”

A collection of photographs, filmed footage College kit and documents from the Bedford Physical Education Archive – which is permanently housed in the University’s library at the Bedford campus – was displayed during the ceremonies, helping to further contextualise the occasion.

History of the College and information about the Bedford Physical Education Old Students’ Association can be found online – visit: www.bpeosa.co.uk

Student crowned ‘Midwife of the Year’