Blackpool’s Christmas By The Sea is back for 2022 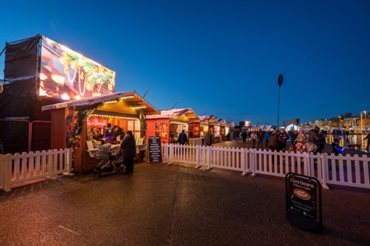 Blackpool’s spectacular Christmas village is returning this winter – thanks to the resort’s tourism businesses and national broadband providers, TalkTalk.

The Tourism Business Improvement District (TBID), which represents scores of tourism operators, has joined forces with sponsors TalkTalk to ensure the event can go ahead during Blackpool’s extended Illuminations season.

Last year, Christmas By The Sea delivered the highest visitor numbers ever recorded on the seafront during the winter months.

The village, which will operate from Friday 18 November to Monday 2 January, will also see themed children’s attractions and the return of the Star Flyer which, at 260ft tall, is one of Europe’s tallest swing rides.

“The Blackpool TBID was established last year with the purpose of maintaining Blackpool’s position as the UK’s number one seaside destination and events are key to our strategy.

“The Christmas By The Sea event last year drove record visitor numbers to the town and the many tourism businesses we represent are keen to make this year’s celebrations even bigger and better. We are delighted to be able to offer the level of support to make it happen again in 2022.”

“Our sponsorship coincides with the roll out of our Full Fibre broadband across Blackpool which offers the community the UK’s fastest, most reliable broadband at great TalkTalk value.

“We can’t wait for Christmas By The Sea to kick off and hope everyone enjoys all the free family activities on offer.”

“Christmas By The Sea proved to be one of the most spectacular events of 2021 and attracted visitors from far and wide. Thanks to funding from both the TBID and TalkTalk, this year’s event promises to be even bigger and better.

“Many of the attractions including the rink, projection shows, snowfalls and light installations will once again be free to access, giving families the opportunity to enjoy a magical and memorable Christmas.”

Don’t forget, there is still plenty more free entertainment to look forward to in Blackpool over the coming months:

The 2022 Blackpool Illuminations have once again been extended by two months and will shine each night from September 2 to January 2, 2023. For Switch-On times and full details of this year’s display including the free nightly projection shows on The Blackpool Tower, go to: www.visitblackpool.com/illuminations

The Illuminations remain one of the UK’s most endearing and enduring tourist attractions, having shone for more than a century. Blackpool was one of the first of 101 towns in the UK to secure funding from the Government’s £3.6bn Towns Fund. With the help of this support, funds were allocated to upgrade the Blackpool Illuminations to attract additional visitors by developing new features and lighting technology. The newly-reimagined Golden Mile area, designed by Laurence Llewelyn-Bowen, is the first section of the Illuminations to benefit.

Watch the Blackpool night skies light up with four brilliant firework displays synced to music as teams from across the world battle it out. Three countries will participate over alternate Saturdays on October 1, 15 & 27 with the showcase event taking place on Friday 28 October sponsored by Coral Island.

A statement from the Leader of the Council

Blackpool's back – and so are two of the resort's biggest events!