£29,000 of illegal tobacco seized in Cheltenham

Illegal tobacco with a street value of £29,000 has been seized from two premises in Cheltenham by Gloucestershire County Council trading standards officers. 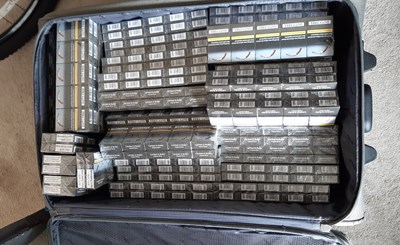 Officers executed warrants on a shop and a flat in the town on 7 September 2022 and discovered a large quantity of illegal tobacco.

The warrants followed a lengthy investigation into the sale of illegal tobacco from a shop in the town. The shop, which has been a front for the sale of tobacco for several years, has been subject to numerous visits by trading standards officers.

Test purchases showed that illegal tobacco was being sold from the shop, but enforcement visits always failed to identify any significant quantities of illegal tobacco at the premises.

Efforts at enforcement action always led to a change of ownership of the shop premises and a denial of wrongdoing.

The investigation identified that the shop received deliveries of illegal tobacco several times a day by a man riding a bicycle and officers established that he began his journey from a residential address around half a mile away.

Cllr Dave Norman, cabinet member for trading standards, said: “This investigation has shown that this is an organised operation and that illegal tobacco has been stored off site to frustrate enforcement action.

“This shows the lengths that criminals go to so they can flood the high street with illegal tobacco. While the tobacco is cheap, much of it is either a counterfeit copy of a known brand or a product made for the black market.

“These products have no legitimate market in the UK and those behind this operation are making large profits at the expense of the local community.”

Protect your business and employees from fire risk