UK joins mission to search for the origins of the Universe 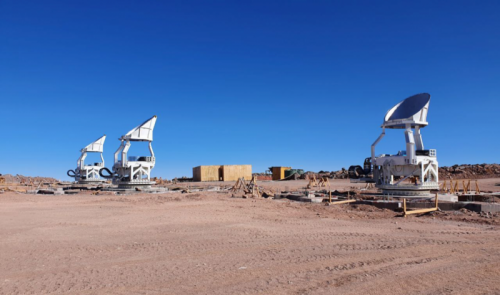 The two types of telescope on SO will do two different jobs. The small aperture telescopes are focussed on searching for signatures of primordial gravitational waves. If detected, this signal would open a unique observational window on physics at very early times, and at ultra-high energies.

The large aperture telescope will address a range of unsolved questions including the nature of neutrinos and other relativistic species, the nature of dark matter, and the physics giving rise to the observed accelerated expansion of the Universe.

Starting this month, the six universities delivering the major new UK contribution are:

With £18 million funding from UK Research and Innovation, through the UKRI Infrastructure Fund, the UK will be leading on two additional telescopes providing a major increase in the sensitivity of the facility, along with UK expertise in data processing and analysis.

The UK lead, Professor Michael Brown, of The University of Manchester, said: “SO is poised to become the leading CMB project of the 2020s. It will address some of the most profound questions in all of science. With this major new funding, UK scientists will continue to play a world-leading role at the forefront of this high-profile science area.”

Dr Colin Vincent, Associate Director for Astronomy at STFC, said: “This major investment by UKRI will allow UK researchers to spearhead discoveries alongside partners in this international facility, uncovering the secrets from the very dawn of time.”

Partnership to create opportunities for thousands of young people in Salford

Statement on investigation into work of PhD student