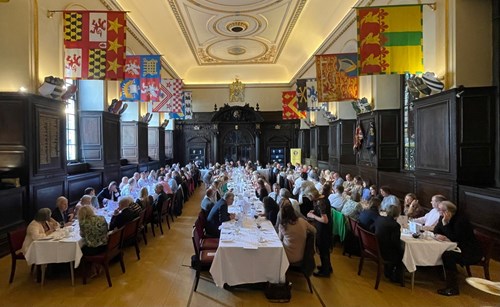 The British Guild of Agricultural Journalists (BGAJ) represents editors and journalists, broadcasters, photographers and PR/marketing specialists working in British agriculture, commercial horticulture and other rural industries. Members work freelance and full-time for newspapers, specialist publications, consumer magazines, in radio and on television, in online media, for agencies, commercial businesses and other organisations in the rural sector.

Eden District Council was a proud sponsor of the BGAJ annual Harvest Festival Lunch and awards ceremony, held at Stationer’s Hall in London on Thursday 13 October.

Land Healer – How Farming Can Save Britain’s Countryside author, Jake Fiennes, was the guest speaker at the event, which was attended by a range of journalists, broadcasters, photographers and others closely associated with agricultural businesses, including Andy and Anne Newbold, organisers of this year’s inaugural Cumbria Farm Business Awards.

The BGAJ’s prestigious annual event, which was preceded by a traditional Harvest Festival service at St Bride’s Church, saw journalists, photographers, marketers and influencers receive awards for their contribution to the documentation and promotion of agriculture in the UK.

Officers from the Council attended the event to promote its proposed £8m Inspiring Eden Enterprise Hub, a facility for rural enterprise creation, development and growth in Eden. The hub is a key component of the district’s ‘Inspiring Eden’ initiative to drive economic recovery, prosperity and levelling up.

“The BGAJ have long supported and promoted agricultural businesses in the UK and their annual awards ceremony provided the perfect platform for us to promote Inspiring Eden, our own vision for achieving rural excellence in Eden.

“I’m delighted that were able to add Eden District Council to the list of industry sponsors for this year’s BGAJ Harvest Lunch, especially given the pivotal role that agriculture has played and continues to play in shaping Eden’s economy, communities and spectacular landscapes.

“In particular, the Inspiring Eden Enterprise Hub, our flagship project, will provide 3,390 sqm of new high quality managed business space and a focus for business support service outreach, supporting an estimated 740 businesses within the hub itself and in the wider district, creating an estimated 655 jobs and £26.2m in additional economic value over a 10-year period across both traditional and emerging economic sectors.”

Vote to help shape the future of local government