Croydon will remember those who lost their lives in the Sandilands tram derailment at a civic ceremony on Wednesday 9 November in New Addington.

Marking the sixth anniversary of the tragic incident, the ceremony is set to begin at 11am at Central Parade, where a memorial was installed in honour of those affected by the tragedy.

Croydon’s Civic Mayor, Councillor Alisa Flemming, will open the ceremony – leading a period of silence to remember residents who died in the derailment before inviting floral tributes to be laid at the plinth.

Councillor Flemming will be joined by Executive Mayor, Jason Perry, as well as local elected representatives and first responders from the police, ambulance and fire services.

Dane Chinnery, Donald Collett, Robert Huxley, Philip Logan, Dorota Rynkiewicz, Philip Seary and Mark Smith lost their lives in the derailment and are remembered by their friends, family, and the residents of Croydon. More than 60 people were injured in the tragedy near Sandilands tram stop on 9 November 2016. 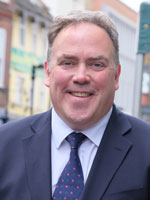 “Croydon will always remember our seven residents who lost their lives in the Sandilands derailment. Six years on, our thoughts and condolences remain with those living with the loss of their loved ones, as well as anyone else affected by the tragic events of November 2016.”

If you have been affected by the tram derailment there are support services available:

Sarah Hope Line provide advice and support with regards to financial assistance and emotional support. You can call The Sarah Hope Line on 0343 222 5678, Monday-Friday 08:00-18:00. A voicemail service operates outside of these times. You can also contact by email at SHL@tfl.gov.uk.

Croydon Talking Therapies (formerly IAPT) service offer a range of psychological therapies to adults 18 years and over, who are registered with a Croydon GP.

We’re here for our young people this summer – Newsroom