Leeds prepares to host His Majesty The King 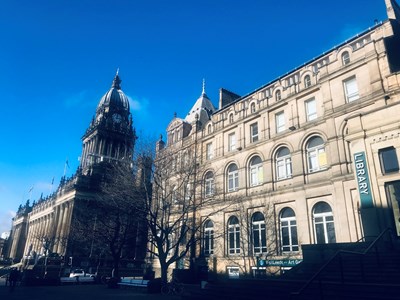 The historic Leeds Central Library will welcome His Majesty The King this month as part of the monarch’s first visit to Leeds since ascending to the throne.

The visit on Tuesday, November 8 will see The King unveil a special plaque at the library to mark the 10th anniversary of the Child Friendly Leeds initiative, which for the past decade has worked tirelessly to make Leeds the best city to grow up in.

As well as having the opportunity to explore the library and its vast collection, The King will also visit Rebellion to Romance, an exhibition at the library by The Jamaica Society Leeds which explores the lives of second-generation West Indians in Leeds coming of age in the 1970s and 80s.

His Majesty will also have the opportunity so see a series of stunning sculptures created as part of The World Reimagined, which will be brought together inside Leeds Art Gallery.

The thought-provoking arts project has seen Leeds join cities around the UK in hosting a trail of large scale, colourful globes created by renowned international artists which explore the history and impact of the Transatlantic Slave Trade.

School pupils from Leeds, who will also attend the visit, recently submitted poems inspired by The World Reimagined which will be included in a national anthology.

The King will be welcomed to the library by The Lord Mayor of Leeds, Councillor Robert W Gettings MBE JP, Councillor James Lewis, leader of Leeds City Council and Tom Riordan, the council’s chief executive along with members of the library and Child Friendly Leeds teams.

Also attending will be newly elected Leeds Children’s Mayor Mason Hicks. Mason, aged nine, was elected last month after campaigning on a manifesto children’s mental and physical health, promoting kindness and community spirit, and the creation of an event to bring children together from different backgrounds.

The Lord Mayor of Leeds, Councillor Robert W Gettings MBE JP said: “It’s an absolute honour to be hosting His Majesty The King and to have the opportunity to not only give him the warmest of Leeds welcomes, but to share some of the remarkable initiatives which make Leeds such a special and unique place.

“In particular we are incredibly proud that The King will be helping us to mark 10 years of Child Friendly Leeds, an initiative which has made such a profound and lasting difference to the lives of so many young people and families across the city and within our communities.”

Councillor James Lewis, leader of Leeds City Council added: “Welcoming a member of The Royal Family to Leeds is always a huge and historic occasion for the city and we’re especially excited to be welcoming His Majesty The King for his first visit to Leeds since ascending to the throne.

“We hope that sharing some of our city’s superb work supporting young people as well as our proud history and heritage with The King will help create a lasting impression of Leeds as a welcoming, nurturing and diverse city.”

Launched in 2012, Child Friendly Leeds began as a city-wide initiative to make Leeds the best city to grow up in. It included extensive consultation to learn what children and young people felt would make Leeds a child friendly city which was used to shape and influence a number of policies across the city.

They have included a collaboration with West Yorkshire Combined Authority bus operators to deliver cheaper public transport as well as an increase in spaces, places and activities on offer to families in the city centre.

The Grade II Listed Leeds Central Library was opened in 1884 and as well as being a public library, is home to a vast collection of historic books, archives and family history records. What was once the library’s Reading Room is today the stunning Tiled Hall Café.

Designed by noted architect George Corson, who also designed Leeds Grand Theatre, on its opening day the room’s vaulted ceiling was thought to be so magnificent there were fears it might prove a distraction for people reading the library’s magazines and newspapers.

On the day of the visit, both the library and Leeds Art Gallery will be closed.