Parents spend an incredible £1.5K a year – having their kid’s friends round for playdates

Parents spend an incredible £1.5K a year – having their kid’s friends round for playdates, according to a study.

Researchers polled 1,000 mums and dads of children aged five or under and found they arrange around three of the get-togethers every month – with each one costing just shy of £40.

Amazingly they will spend a total of 20 hours over a typical 12-month period eagerly organising playdates for their little ones – that’s 100 minutes per month.

Amid this, four in 10 will go to great lengths to ensure a host of exciting things are planned – including superhero-themed activities, making pizzas together and adorning fancy dress.

Forty-one per cent will buy the very best snacks and two in five will tidy their house just for the benefit of their little one’s friends.

Others will hire an entertainer and some will even get the best cutlery and plates out.

And more than one third admit they do all this just to impress other mums and dads.

But despite the best efforts of parents, the research commissioned by Teletubbies, found sometimes things do go hilariously wrong.

One parent said the kids at their playdate ‘helpfully’ smeared nappy rash cream all over their brand spanking new 50 inch plasma TV.

Another said the children at their event gave their dog a makeover – covering it in glitter glue – and another revealed the kids at their gathering fell into a pond while attempting to catch frogs.

A spokesman for Teletubbies said: “The Teletubbies love to play – in fact, you could say that they are on a constant playdate. 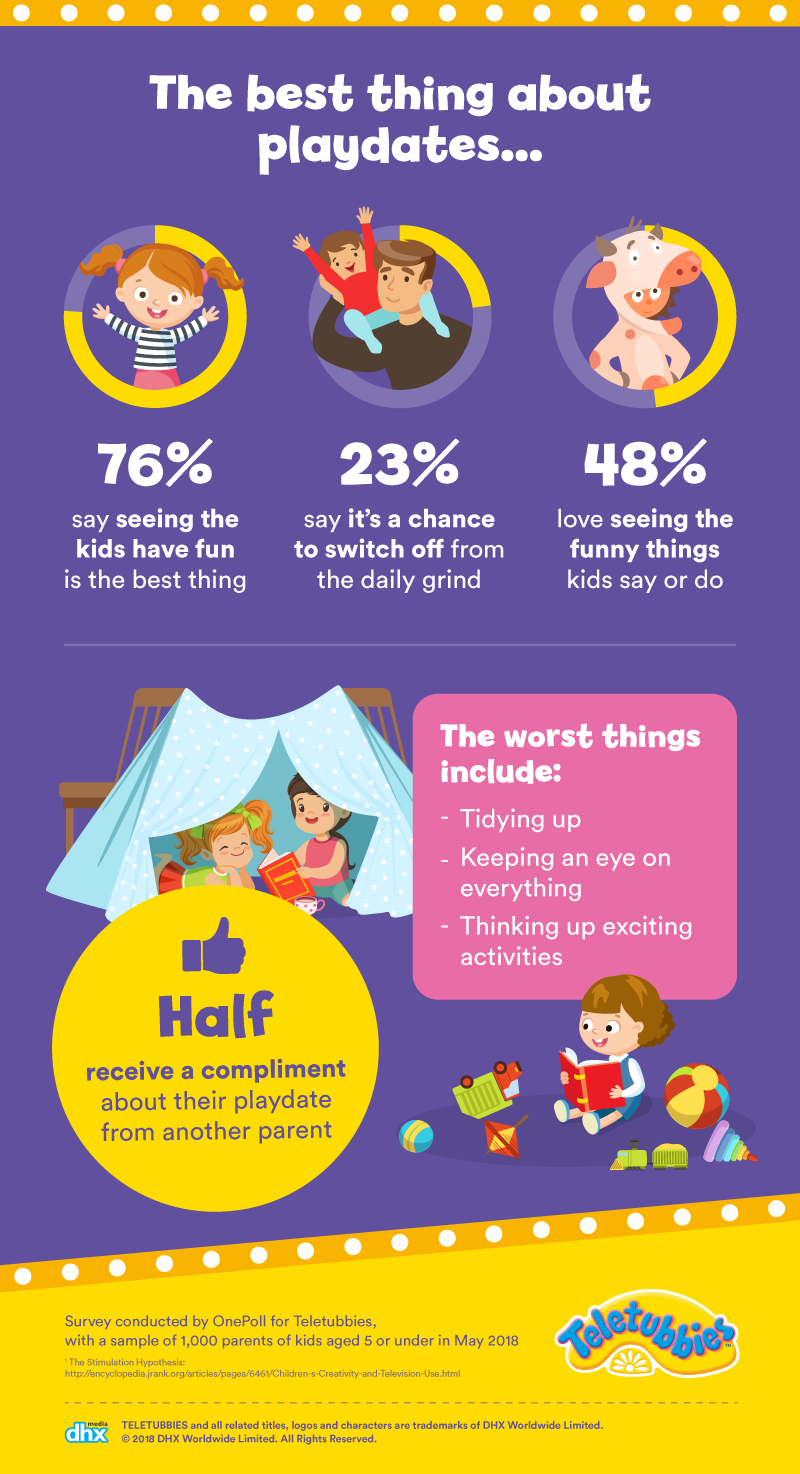 “We know how important play is to a child’s development especially in the early years, but we also know that playdates can be stressful for some parents and they don’t have to cost a fortune either.

Although an incredible 90 per cent really enjoy organising playdates, it also emerged around two thirds simultaneously worry about their playdates being successful.

However those polled did offer advice on how to survive one – top of the list is ‘don’t worry about the mess.’

The second most popular tip is ‘do NOT give the kids too many sugary treats’ and next up is ‘have a clear start and end time.’ 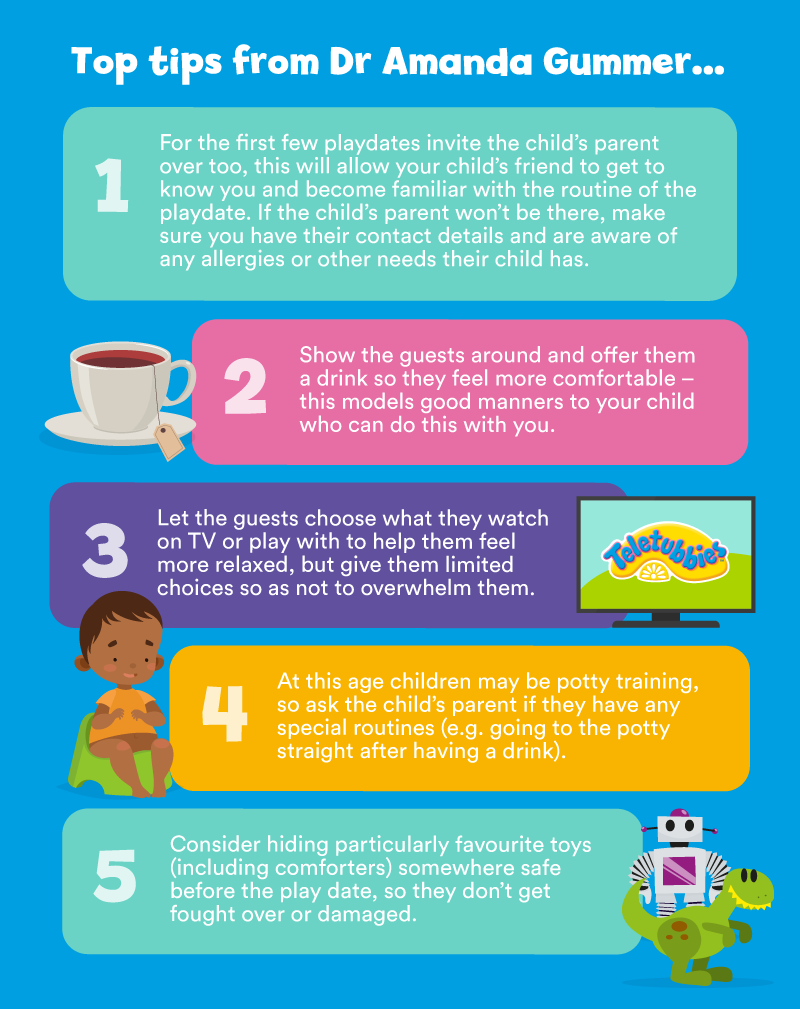 Other pearls of wisdom include ‘have a back-up plan – in case it rains or planned activities don’t pan out’ and ‘let visiting kids bring their own toys.’

The optimum number of kids for a playdate according to those polled is four and the best locations to have one are at a park and at home.

But it appears the efforts mums and dads go to are worth it, with almost half receiving that all-important compliment about their playdate from another parent.

For the vast majority of those polled though – 75 per cent – the best thing about a playdate is seeing the kids have fun.

Forty-six per cent love seeing the funny things kids say or do and for 23 per cent it’s a chance to switch off from the daily grind. 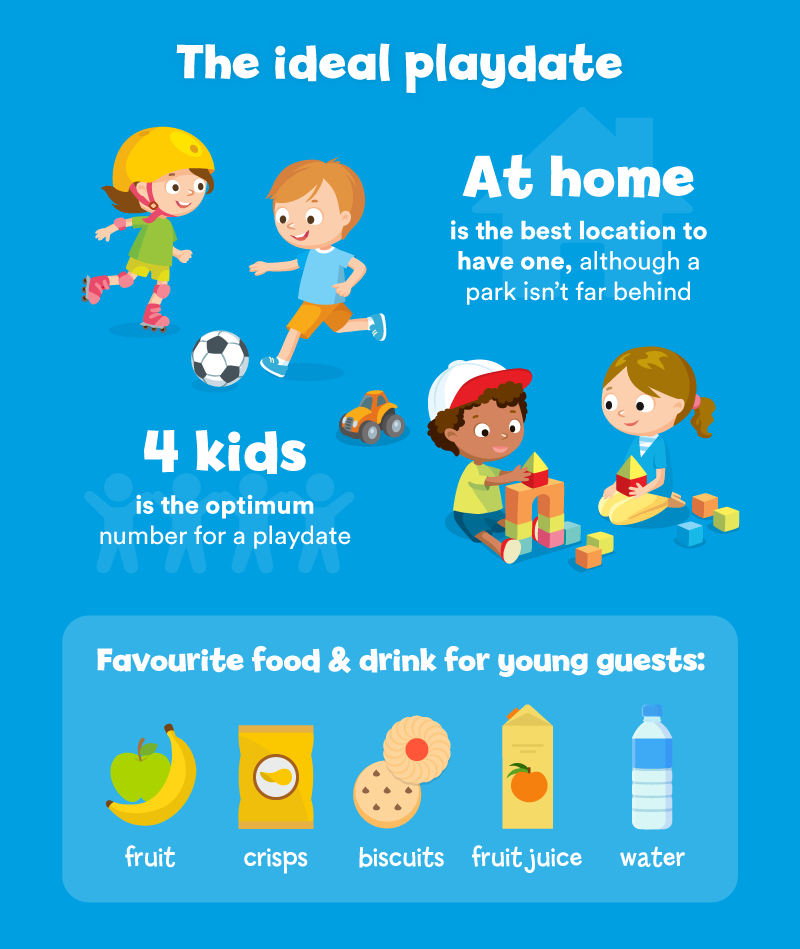 However, the worst things include tidying up after all the fun is over, having to keep an eye on everything and having to think up exciting things to entertain the kids.

A spokesman for Teletubbies added: “Our research shows that parents clearly see the value in organising playdates and realise how important they are for their children.

“We hope that parents will be inspired to download our specially created Teletubbies playdate pack and that by following Dr Gummer’s tips their playdates are stress free and enjoyable.”

Dr Amanda Gummer said: “Playdates are a great way for children to socialise and develop skills such as communication, turn-taking and sharing. Children benefit from being left to play with their peers.”

Is Family Chatter At The Dinner Table Dead?