Car stereos are a whole lot more advanced than they used to be. Gone are the days when they would just play music.

Most car stereos are now all-in-one entertainment and control systems in your vehicle.

Let’s take a look at some of the best features that you can find in new car stereos, shall we?

If you have an iPhone, then you are going to absolutely love this feature.

If you have a stereo with a screen, then there is a good chance it will have Apple CarPlay. The screen in your vehicle can be used as a controller for your iOS device.

Essentially,  this is like having Apple CarPlay on iPad but instead is a built-in head unit. This means that you will be able to do a wealth of things including:

This is the Android equivalent to Apple CarPlay. It isn’t quite as sophisticated as the Apple option, but you will still be able to answer calls, play music, etc., without even touching your phone.

Google is behind Andriod Auto, and while not quite like Apple CarPlay, it’s an excellent option for Andriod users, compared with the current offerings available from most car manufacturers’ standard head units.

Chances are that you want your vehicle to look as fantastic as possible. You want it to really reflect your personality.

You will be pleased to know that many more modern car stereos are customizable. This means that you will be able to control the colors on the screen to match your aesthetic. You may even have a bit of control over the types of information that the screen will display too.

This isn’t a staple feature with modern car stereos. However, we have noticed that more and more of them are starting to come with GPS as standard.

This means that you are going to have a route finder built into your car stereo, It saves you needing to get a separate device or whip out your phone when you are trying to navigate tricky roads.

Sadly most factory car navigation systems (usually built into the infotainment system) from the likes Audi, BMW, and Mercedes continue to be less effective than the like of Google or Apple maps. One of the reasons people tend to pick CarPlay or Andriod auto over their factory system. 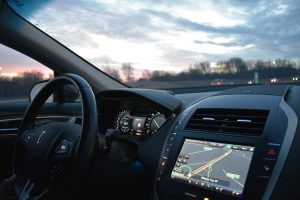 We don’t know when you last purchased a car stereo. However, if you haven’t in a while, then you should probably know that many are now compatible with Bluetooth.

This means that if you are getting a little bit bored of the radio, you can hook up your phone to the stereo and stream music from your favorite streaming service.

While not strictly a car stereo feature, we are starting to see wireless phone charging built into new cars as standard. This means no more untangling wires to charge your phone before driving off. Instead, you can just pop it down on the IQ charging mat.

In fact, it’s so well hidden many car owners are oblivious they even have this feature in their vehicle. One example of this is the new model of Tesla, which has a wireless charging pad under the huge iPad-like center console.

We briefly touched upon this with Apple CarPlay and Android Auto. However, even if your stereo doesn’t have one of these options available, many of them will still allow you to answer phone calls.

Basically, when you receive or make a call, your stereo is going to turn into a giant hands-free system.

This is a must for driver safety and is becoming increasingly essential to take drivers away from distractions from mobile devices. In some counties such as the United Kingdom, driving while using your mobile phone is highly illegal and can lead to severe penalties if caught.

You can connect all sorts of gadgets up to them e.g. video systems for the back seat, extra speakers, etc.

Manufacturers around the but particularly Japanese, American, and German car stereo brands, are adopting functionality such as this.

We are only just scratching the surface of the wealth of features that you will find loaded into new car stereos. If you haven’t purchased a new stereo in a while, you will be in awe at the options available to you now.  As we said, a new car stereo will turn your vehicle into an entertainment system.

You’ll now be armed with the knowledge of upcoming trends in the car stereo industry and what features you should be looking out for.

4 Important Road Laws to Remember While Riding a Motorcycle

PLANNING TO BUY YOUR FIRST CAR, HERE IS ALL YOU NEED TO KNOW

Top 7 Tips to Take Into Consideration When Buying New Car

The Benefits of Owning an Electric Vehicle

The Smart Way of Buying a New Vehicle