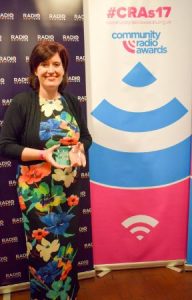 The proud mum-of-two, who once found herself behind the scenes as a theatre stage manager, is now very much star of the show as breakfast presenter on Tameside Radio (103.6 FM).

She wowed a panel of 50 judges from the BBC, commercial radio and other media, to scoop gold awards including ‘2017 Female Presenter of the Year,’ as well as ‘Speech and Journalism of the Year’ at the second annual Community Radio Awards.

Judges selected the best programmes and stations from more than 350 national entries across 70 community radio stations.

Gold Duo thrilled the Radio Star: Louise Croombs picks up her first trophy of the evening at the Community Radio Awards

Louise’s award-winning empathetic broadcasts towards homeless people, which saw her sleeping rough for two nights to see for herself the issues faced by people on the streets, earnt her a second gong. She ran a series of interviews with those affected or involved, including Ashton-under-Lyne MP Angela Rayner.

She first realised she had the gift of the gab, when starting out on Royal Berkshire Hospital Radio, coining four awards including Best Newcomer in the National Hospital Radio Awards 2010.

The Hyde presenter then worked her way up until she became the first female to host a daytime show on Tameside Radio, while still finding time to volunteer for over 50 organisations and work as a drama therapist.

Louise said: “Last year I was delighted when I won a silver award for best female presenter. I didn’t think I could go any higher but winning gold is a fantastic achievement and I’m so proud. I really couldn’t be happier.

I’ve got no formal journalism training – I’ve just really worked hard to get where I am by learning on the job as I’ve gone along.”

One judge in the female presenter award category, said of Louise’s entry: “A breadth of skill across so many different techniques, from lively personality-led radio, serious news broadcasting and reporting live – this entry has everything.”

Martin Steers, Community Radio Awards Chair, said: “We can’t believe how much these new awards have caught the imagination of the movement of volunteers who are producing fantastic and engaging radio for their communities.

“It can be a long old haul keeping output going over the long term on very minimal funds, so we’re pleased to see that the sector is not only surviving but thriving, and is increasingly the answer to bringing communities together and serving those who are being left behind by the traditional and mainstream media.”

Louise Croombs has previously won Gold for Best Newcomer, Female Presenter of the Year and Best show with Multiple Presenters at the National Hospital Radio awards.

If you want to hear Louise’s dulcet tones, you can tune in to Tameside Radio between 7am and 11am on weekdays.

Notes to editors
• The Community Radio Awards (CRAs) are independent and not-for-profit, established in 2016 to celebrate community radio; and to recognise the hard work and time that the volunteers involved in community radio put into their stations, shows and communities.
• Full list of Community Radio Awards 2017 at: communityradioawards.org.uk
• Additional images of the awards are available from: https://www.flickr.com/photos/144448654@N03/albums/72157685523396742

BUSINESSES PLEDGE TO IMPROVE OPPORTUNITIES FOR REFUGEES IN THE UK

How can businesses survive Covid-19 and hit the deck running when the coast is clear?