LIT ATLANTA has major network appeal with an amazing cast to match! 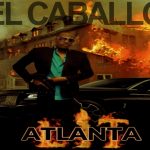 Detailing the inspired by true events pertaining to rise of the Zone Boss of Bosses from Atlanta Georgia. With detailed accounts revealed in this calculated powerhouse of a pilot series. By showing the statement that is cementing the show’s concept of “No One is Safe!”
Although the many law enforcement has tried to dismantle the elaborate way these narco traffickers clean and wash their money. The DEA never saw this coming and yet, it has been in their face the whole time. This out in the open concept literally will slap the law in it’s face for not recognizing this is going on.

This show has an all familiar story to tell of drug deals with new faces pushing pass the great wall of cocaine. Bringing with it are several twists and turns this is within 2 minutes of the show’s pilot beginning.
Let me introduce you to the man that makes it happen on a massive scale:

‘ El Caballo ‘ is notorious for being known as one of the biggest drug kingpins in Atlanta’s history. This crime drama tracks El Caballo’s life in crime, from his beginnings in the drug zones in present day through his rise to power as the leader of Atlanta’s narcotraffickers. Along the way, he battles enemies and people who try to stop him from building his empire

Lit Atlanta: is an American crime drama web series created and produced by Blue Gold media set to premiere on a major streaming network once finished. It focuses on the illegal drug trade in Atlanta Georgia.
“Lit Atlanta” explores the new visionaries of the drug war both trafficking and law enforcement. Bringing a once disorganized of independent zone bosses, the mafia, and cartels together in the present. As ‘ El Caballo ‘ takes control of the unified narcotraffickers to see his vision to expand.
Corrupt government and DEA agent’s all look to either take bribes or take him & his organization out by any means.

This show will base its series success on these two key components a great cast of actors actresses, and action.
The director is using Atlanta’s beautiful scenery and bustling city participation with camera angles to bring the plot’s betrayal, and money washing to life.
It has literally brought the obvious attention out to this pilot series from some heavy-hitting streaming networks.

The narcotrafficking game has finally taken a change! With the new ideas that El Caballo has devised and the unification meetings of these zone bosses, cartels, la costra nostra, triads, and yakuza, and the Russian mob. Inspired by true events, this series has the game brought to the highest levels.
Watch the LIT ATLANTA crime drama series trailer:
https://youtu.be/_rlSyPeVZHo

These are the top 10 signs of a competitive dad