Major NBA Team Upgrades, Can Bucks Challenge For The Title Next Year?

The Milwaukee Bucks are likely still high off their NBA title win from earlier this year. Led by the formidable Giannis Antetokounmpo, the Bucks ground their way to the NBA Finals to win their first ring in 50 years after going down 2-0 to the Phoenix Suns.

Antetokounmpo can consider his circle of achievement complete, having finally added a championship and Finals MVP to his cabinet, which already consists of two MVP trophies and a Defensive Player of the Year Award. However, you can be sure he won’t be resting on his laurels and will be out to add rings to his hand.

As to whether the Bucks can repeat is left to time to tell. They certainly aren’t favored to win the upcoming season, with the NBA picks pointing to the Brooklyn Nets. The Nets have very few upgrades to make and are, by far, the strongest team on paper heading into the term. As long as they have all of their stars healthy, Brooklyn should have no trouble reaching the final next year.

The team nearly got there last term, as hobbled as they were, with Kyrie Irving sustaining an ankle injury in Game 4 against the Bucks while James Harden played through a hamstring injury. Even so, the Nets would have reached the final had Kevin Durant’s foot not been on the line when he drained a buzzer-beater that sent the decisive game into overtime instead of prompting celebration for Brooklyn.

It’s easy to see why a healthy Nets team should run through the East next season. They have three of the greatest players of the current era playing together, with Irving and Durant boasting lots of finals experience between them.

Harden, for one, can’t see anyone usurping his team when they’re at full strength.

“There’s no chip at all, no chip for us. We’re just excited. We’re focused,” the guard told Sports Illustrated in a recent interview. “We know what we have to do. The biggest thing is us being healthy, which we will be. Honestly, we’re just excited to play a whole season together. That’s the exciting part.

“At full strength, nobody can beat us. I’m just going to leave it at that.”

The former Houston Rockets star began last season visibly overweight but we suspect that will not be the case in 2021/22.

“Conditioning is going to be my main focus. I’m still trying to basically get healthy from my hamstring injury, which I was dealing with for a few months,” he told said publication. “So I want to make sure I’m completely healed and strong enough so I can go out there and completely be myself. My rehab is going very, very well, and my getting my conditioning right is a big part of that.” 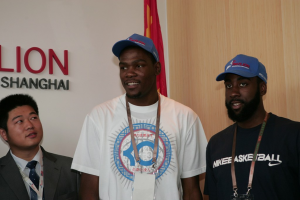 The Nets are the favorites to win the East and the favorites for the Championship but 2020 finalists, the Miami Heat, should have a thing or two to say about that.

The Heat didn’t have as great a season in 2021 and they’d be correct to blame the short rest period between going all the way to the finals and having to start the term after the shortest offseason in NBA history. The Los Angeles Lakers didn’t fare that well either after winning in the bubble – both teams went out of the playoffs in the first round, with the Lakers having to take the play-in tournament route.

Heat president Pat Riley assured that the team had plans to strengthen but would focus on rest and recovery after a grueling pair of seasons. They have since made some great additions to the roster, bringing in Kyle Lowry via a trade for Goran Dragic. Lowry is a definite upgrade on the Slovenian, albeit not that significant as Dragic is quite a lot to handle when healthy. The former Raptors guard, though, is one of the most solid guards in the NBA and knows what it takes to win a ring after doing so alongside Kawhi Leonard in 2019. He should prove to be a huge boost in the upcoming season.

The Heat have also added PJ Tucker, who is one of the best defensive players in the NBA and was a key part of the Bucks’ run to the title last season. They have also managed to keep their core intact, with Jimmy Butler, Bam Adebayo, Duncan Robinson and Tyler Herro all set to run it back, but did allow Kendrick Nunn to leave – the undrafted star has signed a two-year deal with the Lakers.

Of course, the Bucks will always have a chance, but they aren’t expected to win the title next year given the NBA’s vastly different landscape.

5 Genius Ways to Save Money Online

Streaming Live Sports: How to Do It Right to Avoid Lag?