Shiba Inu’s price is hovering near a critical support level and is indicating the possibility of a quick run-up. Meanwhile, HUH Token looks set for a breakout and could surge over 160%.

Shiba Inu appears to be getting ready for a 50% upswing to test previous resistance levels.

Shiba Inu’s price established a support floor of $0.0000350 following the December 4 flash crash and rallied nearly 14% thereafter. The subsequent retracement dipped below the said barrier, establishing a swing low at $0.0000327. This move gathered liquidity beneath the $0.0000350 platform and quickly recovered, indicating that the bulls are in control.

Following a brief rally, SHIB has retraced its steps and is currently retesting the $0.0000350 support level, indicating the formation of a triple-tap setup. Frequently, the third tap of this technical formation is immediately followed by a massive increase in buying pressure.

Assuming a similar outcome, investors can anticipate Shiba Inu’s price to establish a swing high above the $0.0000380 ceiling and collect liquidity above it. This movement will serve as confirmation of the start of an uptrend. Beyond this, SHIB is likely to continue its ascent toward the $0.0000448 resistance level, which would represent a 28% gain. 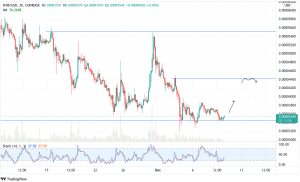 On the other hand, if the Shiba Inu price fails to break through the $0.0000350 support level, the consolidation may resume. However, if selling pressure pushes SHIB below the $0.0000327 platform, the bullish outlook will be nullified.

HUH Token is currently trading in a narrow band between its all time high and a support level at $0.0001344. HUH’s stochastic and stochastic RSI have both broken their bottom band indicating that an upswing is on the way and the price looks set to test the all-time high at $0.0001430.

If the bulls can take the price over this resistance level then HUH could surge to the 78.6% Fibonacci extension level.

With no barriers standing in its way HUH could then continue to climb to the next Fibonacci extension levels at 161.8% and 200%. 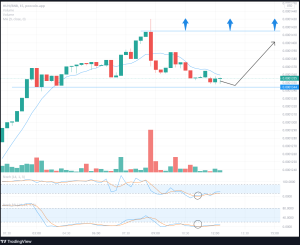 Investors should keep in mind that if the price falls below the support floor at $0.0001000 then this would nullify the short-term bullish forecast.

HUH Token has seen a meteoric rise of over 2000% this week, after launching on Monday December 6, which could be attributed to the new cryptocurrency going viral this week.

HUH has rocketed into the top 20 on PancakeSwap peaking investor interest. As a result, HUH has seen its market cap rise to over $126 million.

The new cryptocurrency dubbed a “utimeme,” aims to compete with other meme tokens by offering enhanced features and utilities.

HUH Token utilises an innovative referral system. A holder of HUH Token can refer others using the code provided at the time of purchase. The holder is then compensated 10% of the new person’s first HUH purchase.

HUH Token is designed to increase in a holder’s wallet incrementally over time using transaction fees, which means that the more tokens a person holds onto, the more tokens they continue receive.

Additionally, investors may be enticed by HUH Token’s announcement of $1 million in liquidity, which will be locked in for at least two years to promote stability and security.

How to select the best place to trade bitcoin?

How Do I Make Money With Crypto In 2022? Polygon (MATIC), Fantom (FTM) and HUH Token (HUH) To Dominate The Alt-Market