What Are Arcade Games?

Arcade games are a type of video game played in an arcade. Arcade games, also known as coin-operated or vending machine games, were popularized during the 1970s and 1980s. Arcade games typically use one or more buttons on a joystick to control their gameplay. Some people find playing arcade video games to be more challenging than playing other video games because they often require players to move fast and react quickly when they see enemies or obstacles coming up close.

Others enjoy the nostalgia associated with these machines. Many people who grew up in the 1980s can remember going into arcades with friends after school just for fun, especially if there was no affordable way to play at homes such as consoles like Nintendo Entertainment System (NES) or Sega Genesis. Now you have games like Spongebob Pineapple or Wizard of Oz. Another popular arcade game is Zombie Outbreak.

Many popular arcade games have been ported to home video game consoles and personal computers. Still, they are typically played differently than intended to be played in arcades. For instance, some games like Pac-Man or Space Invaders that use a joystick only require one button on a controller when playing them at home. This is because many arcade cabinets (the casing that surrounds the monitor and electronics for an arcade game) do not have buttons on the joystick itself since they are meant to be used with both hands.

Arcade games started declining in popularity by the early 1990s as more and more people began buying home video game consoles. There has been a resurgence in interest in these types of games in recent years, especially among people who grew up playing them in the 1980s. This has led to the creation of many new arcade games and ports of older ones.

There are several reasons why you should play arcade games.

One is that they can be more challenging than other video games, making them more rewarding to play. They often require players to move fast and react quickly, so they can be a lot of fun to play when you want to let loose and have some excitement. Many arcades also offer a nostalgic experience for those who remember playing these games when they were younger. There are also many new arcade games that you can try out to explore this type of gameplay. So, if you’re looking for a fun and rewarding experience, arcade games are a great option to consider. 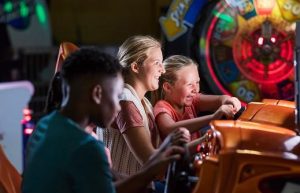 What’s the difference between arcade games and video games?

In general, arcade games are more challenging than other types of video games, and they often require players to move fast and react quickly. They also tend to use fewer buttons than other types of video games. On the other hand, video games can be played on a variety of devices such as home consoles, computers, and mobile devices. They usually have more detailed graphics and offer a wider range of gameplay options than arcade games.

You can have a great time playing arcade games in arcades.

These places usually offer a variety of games to choose from and snacks and drinks. They are great for socializing with friends, and you can also win prizes by playing some of the games. Some arcades also have controllers you can rent to play the games at home. If you’re looking for a fun and exciting experience, then be sure to check it!

A Quick Guide On Planning A Kids Party

WFH Hollywood Edition: How COVID-19 Has Affected the Film Industry

How To Pick An Online Casino?

6 Things To Do At a Sydney Social Club