Muslims are always conservative in following all their social and religious customs on all their festive occasions. Hence, Muslim marriages are conducted with several rituals that last for three days, including both pre and post-wedding functions that are usually mentioned in all Muslim wedding cards.

Salatul Istikhara – This Arabic term literally means ‘Prayer of Seeking Counsel’. It is a prayer that Muslims read to seek divine blessings from Allah or God when they need to take a vital decision in life. It is also called Salah in the Arabic language, which is done in two units called Rak’ah. Muslims first recite it while standing and then kneeling down or sitting on the ground before deciding on their life partner.

Imam Zamin – This is a band made of silk fabric, containing a gold or silver coin. It is wrapped around the upper arm of the bride by the groom’s mother before the Mehendi function. She reserves the bride as her future daughter-in-law with this token of love. The groom’s family also presents fruits and other gifts to the bride and her family.

Mangni – This is the official engagement ceremony, which is attended by the families and friends of both bride and groom. It is the first time that the betrothal of the new couple is made public, by exchanging rings in the presence of all guests. 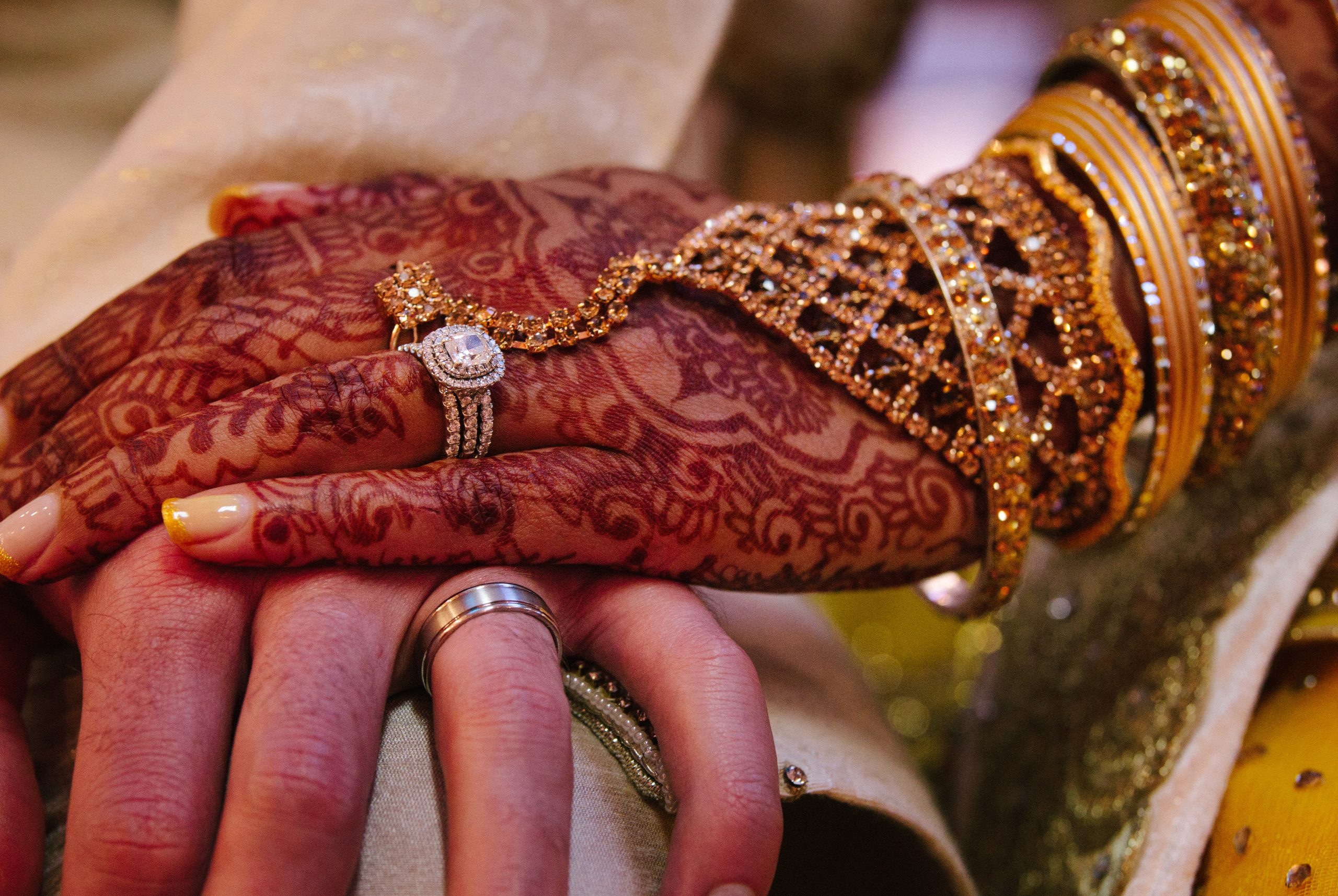 Manjah – This pre-wedding ceremony is similar to the Haldi ceremony of Hindus. Paste of turmeric and sandalwood is made in rosewater, which is smeared on the faces of bride and groom in their respective houses. Both of them wear yellow dresses during this ceremony and they are not allowed to leave home after this function till their wedding.

Mehendi – This is an important pre-wedding ritual for a Muslim bride. All her female friends and relatives join in this function. An expert Mehendi designer draws intricate designs on her hands and feet with henna paste. The name or the initial of the groom is usually hidden in this design, which the groom must search out on their wedding night. 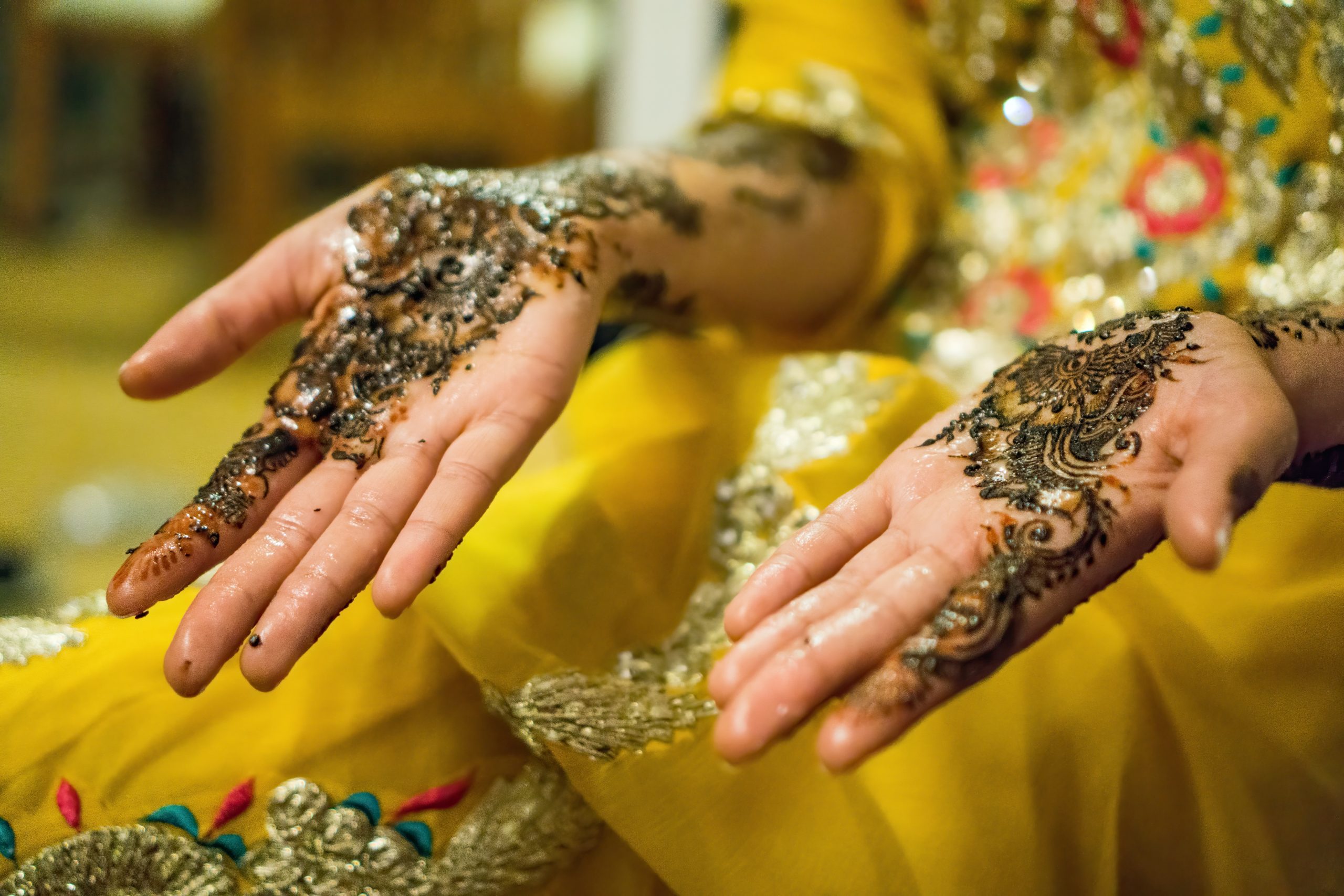 Baraat – The groom starts for the wedding venue in a car adorned with flowers and satin ribbons. His male relatives and friends accompany him on this tour, enjoying a lot all the way. They are heartily welcomed by the bride’s family while entering the wedding venue, by spraying rosewater or ittar on them, and then they are served cold drinks by the bride’s brothers.

Nikah – This is the Arabic term used for a Muslim wedding ceremony. It is conducted by a Maulavi who is the priest of a local mosque or a Qazi. The bride and groom sit in separate enclosures, surrounded by their friends and relatives. Mehr or dowry is offered on behalf of the groom to the bride, which she needs to accept for carrying on the wedding rituals. Then the Maulavi reads some phrases from the Holy Quran and then he asks the bride and groom separately whether they are accepting this marriage proposal. Both  need to confirm his/her consent by saying ‘Qubool Hai’ thrice, which means ‘I agree’. Then the Nikah Nama or the official marriage contract containing all the duties of both husband and wife is read out by the Maulvi, and signed by two witnesses each from both sides. Finally, the Maulavi reads Khutba and marital vows from the Quran. The ceremony ends with the elders blessing the new couple, which is called Durood.

Arsi Mushaf – After the wedding ceremony is over, the bride and groom look at each other through a mirror placed in between them. This is considered a vital part of a Muslim wedding and is conducted before the new couple leaves for the groom’s home.

Rukhsat – The bride and groom bid farewell to the bride’s family when they leave for the groom’s house when the bride and her relatives become emotional. The bride is welcomed by her mother-in-law by placing the Holy Quran on her head when she arrives at her new home.

Walima – This is the reception party organized at the groom’s place, to introduce the bride to all relatives and acquaintances of her in-laws. They hold a lavish feast in honor of the new couple, along with music and dance for the entertainment of all guests.

Chauthi – The bride and groom visit the bride’s parents on the fourth day after their wedding ceremony. The bride’s family welcomes them with lots of gifts and a great feast. This is the last ritual of a Muslim wedding.

All these rituals are usually maintained very diligently in each Muslim wedding, to make sure that the new couple celebrates their marital union happily with their near ones.

Top 10 Questions To Ask A Wedding Photographer Before You Hire Them!

Six Professionals You Need to Hire for Your Wedding

How to Choose the Perfect Wedding Shoes

The Right Wedding Planner Will Make Your Wedding Memorable!