Motorists admit taking their eyes off the road – to stroke pets, use their phones and attempt sex acts on their other half, a study has revealed.

Research revealed four in five drivers have potentially put themselves and others in danger by putting on make-up, caressing their beloved pet or performing a sexual act.

One in four have taken a phone call in the driver’s seat, and 14 per cent have tapped out a text message.

Another eight per cent of drivers have tried to operate the pedals using different feet, while six per cent have attempted a sexual act on their partner while travelling from A to B.

Thirty five per cent have taken their eyes off the road to pass something to the passenger in the backseat, and 20 per cent have kept their foot on the accelerator while checking a map on their phone.

Holger G. Weiss, CEO of German Autolabs, who commissioned the study, said: “Driving is a somewhat mundane part of everyday life for millions of Brits across the country, and this chore-like familiarity can lead us to grow complacent to the potential risks around us.

“And while we are sure many of the four in five drivers guilty of being distracted in the driver’s seat will be confident in their multitasking abilities, we think the findings should be seen as concerning.”

As a result of this distracted driving, 26 per cent believe they have had a near-miss with another motorist, and one in 10 have actually had a collision because their attention was elsewhere.

And only a third of drivers would consider themselves a completely safe presence when they hit the road.

Mobile phones are a key source of distraction for drivers, with 31 per cent confessing to checking their device when they should have their minds on the task at hand.

Despite this widespread use of smartphones and mobile devices while in the driving seat, 44 per cent were unaware of the legal penalty for doing so – six points on your license and a £200 fine.

And two third of those surveyed believe using your smartphone while driving is just as dangerous as driving after two pints at the pub.

And 86 per cent admit it irritates them when they notice drivers in other vehicles using their phone when the road should have their undivided attention.

The average motorists thinks they check their mobile 21 times a day on average, and three of these times will occur while they are driving.

To combat the compulsion to check their phone notification on their drive, almost a third have put their device out of reach in the glove box.

There is also a strong perception that younger drivers are more likely to check their phone than more experienced motorists, with 55 per cent of those surveyed believing drivers aged 18-25 are the most easily distracted by their devices.

Holger G. Weiss of German Autolabs added: “We believe as younger people can often only afford older cars without voice command technology, they are more likely to take their hands off the wheel to check a text or WhatsApp.

“We believe we have a solution to this problem with our product, Chris, which launches in September.

“Chris is the first voice assistant for drivers that will integrate with any car on the road, regardless of the age or model. With Chris, drivers can text or WhatsApp message, change song and use navigations without taking their eyes off the road.”

TOP DRIVING DISTRACTIONS
1. Passed something to a passenger in the front sear
2. Sung along to a song at the top of their lungs
3. Thrown something in the backseat
4. Passed something back to a passenger in the backseat
5. Eaten fast food
6. Taken a phone call
7. Made a phone call
8. Taken off a coat or jumper
9. Adjusted hair
10. Looked at a map on a phone
11. Looked at a physical map / road atlas
12. Stroked a pet
13. Sent a text
14. Kissed a partner
15. Changed song on my phone
16. Experimented with operating the pedals with different feet (i.e. using your left foot to brake)
17. Put on a coat or jumper
18. Checked social media
19. Put on or adjusted make-up
20. Performed a sexual act 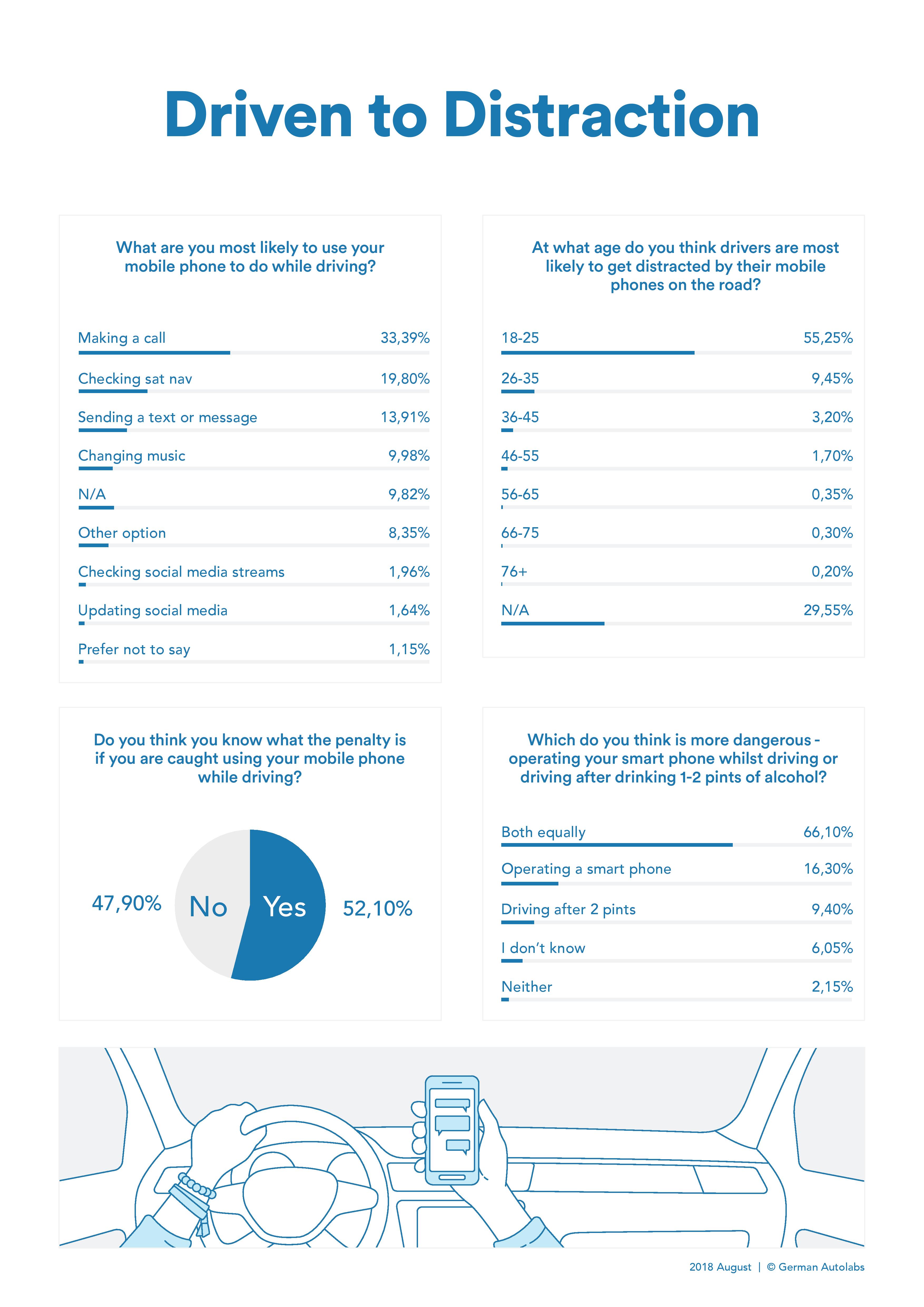 Top 8 Tips On How To Maintain Your Car

Millions of British motorists are unprepared for winter driving

How Long Does it Take Lyft to Investigate an Accident?

How to Protect your Car from Winter Weather

Filing for a Car Accident Claim – What You Need to Know

5 Cars For Your Dream Garage