Dads are the ‘pushover’ at home, apart from when it comes to dealing with ‘bad’ behaviour

It’s official – dads are the ‘pushover’ at home, apart from when it comes to dealing with ‘bad’ behaviour, a study has found.

A poll of 2,000 parents revealed mums are most likely to put their foot down over the time spent watching TV or playing computer games, the amount of sweets and fizzy drinks youngsters consume and bedtime.

Mums also call the shots when getting children to do their homework, eat everything on their plate and try new foods.

But dads are laying down the law with their children’s behaviour and discipline. 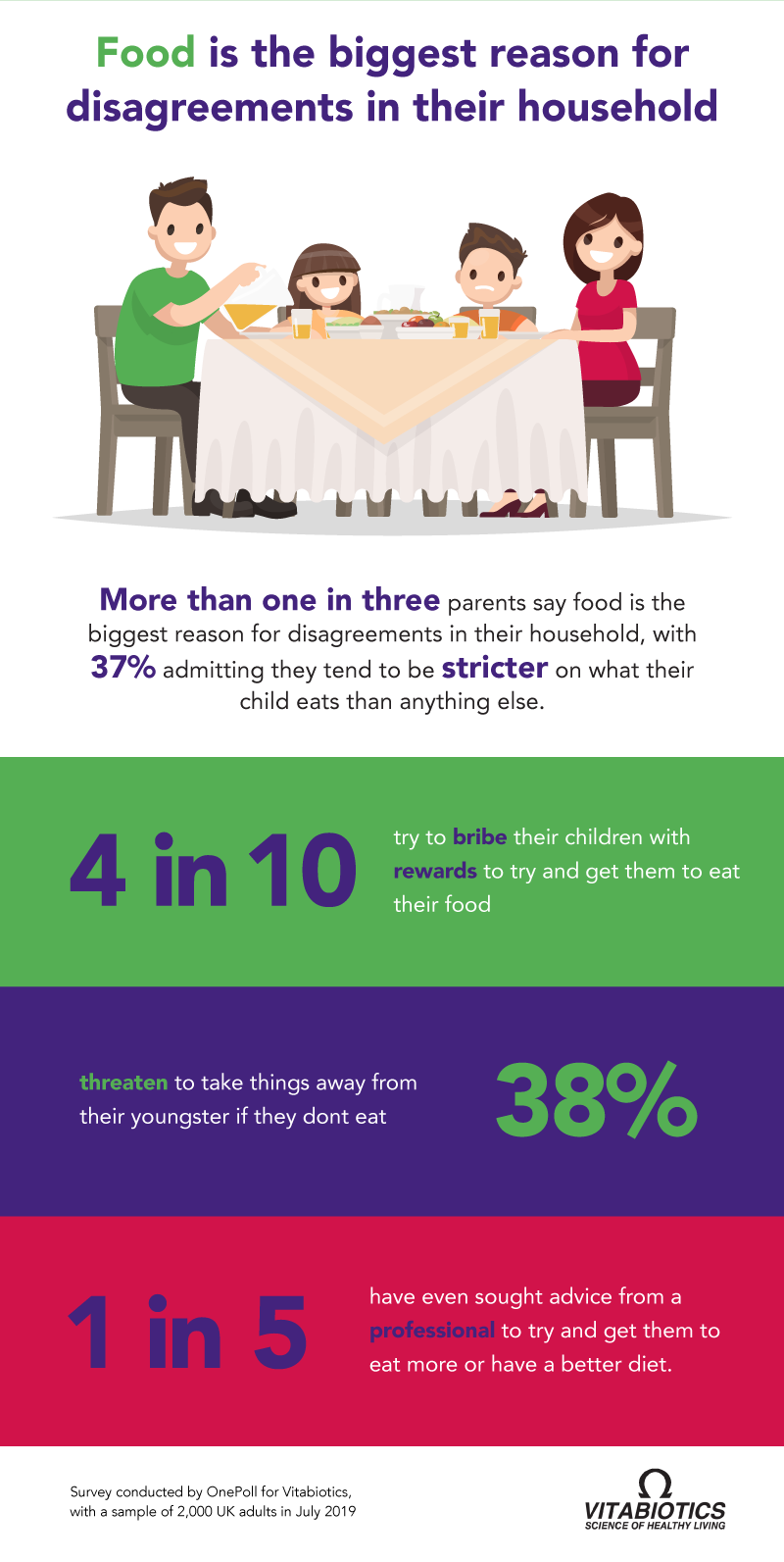 The stats emerged in a study by children’s vitamins Wellkid, which also revealed four in 10 say they and their partner often adopt a ‘good cop, bad cop’ approach to parenting.

A spokesperson for Wellkid from Vitabiotics said: “Parents often have to work as a team when it comes to raising their children, with one of them taking the lead when it comes to being ‘the strict one’.

“And it seems mums are taking that title, with the results showing they are most likely to be the ones getting their children to do everything they should be doing, whether that’s their homework, eating a balanced diet or simply not spending all day glued to a screen.

“But while dads may be adopting a more laidback approach to these aspects of parenting, they are still the ones keeping an eye on bad behaviour.”

The study also revealed four in 10 mums and dads would describe their parenting style as soft while just 31 per cent reckon they are usually strict with their children.

And 41 per cent say mum has the title of ‘The Strict One’ in their household, compared to just three in 10 who name that as the dad’s role.

But 65 per cent of parents believe they and their partner are both strict, just at different aspects of parenting. 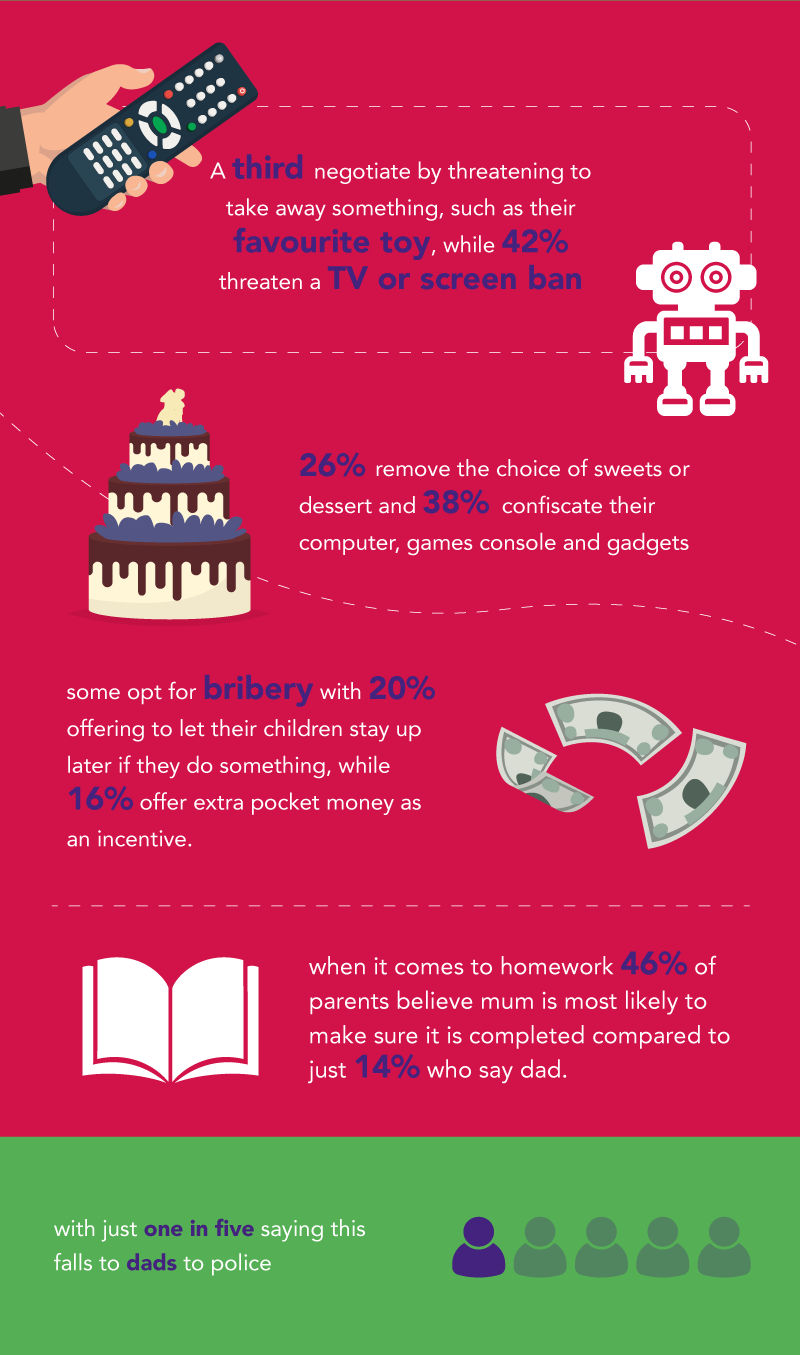 When it comes to homework, 46 per cent of parents believe mums are most likely to make sure it is completed compared to just 14 per cent who say this falls to dad.

Almost four in 10 also say mum decides how long children should spend watching TV or playing computer games in their household, with just one in five saying this is left to dad to police.

Mums also call the shots when it comes to telling children how much food they should tuck into at mealtimes, what fruit and vegetables they eat and whether or not they are allowed to play computer games with older age ratings.

But 31 per cent reckon dads are most likely to be strict at making sure children are well-behaved and face the consequences if they aren’t, compared to 28 per cent who say mum. 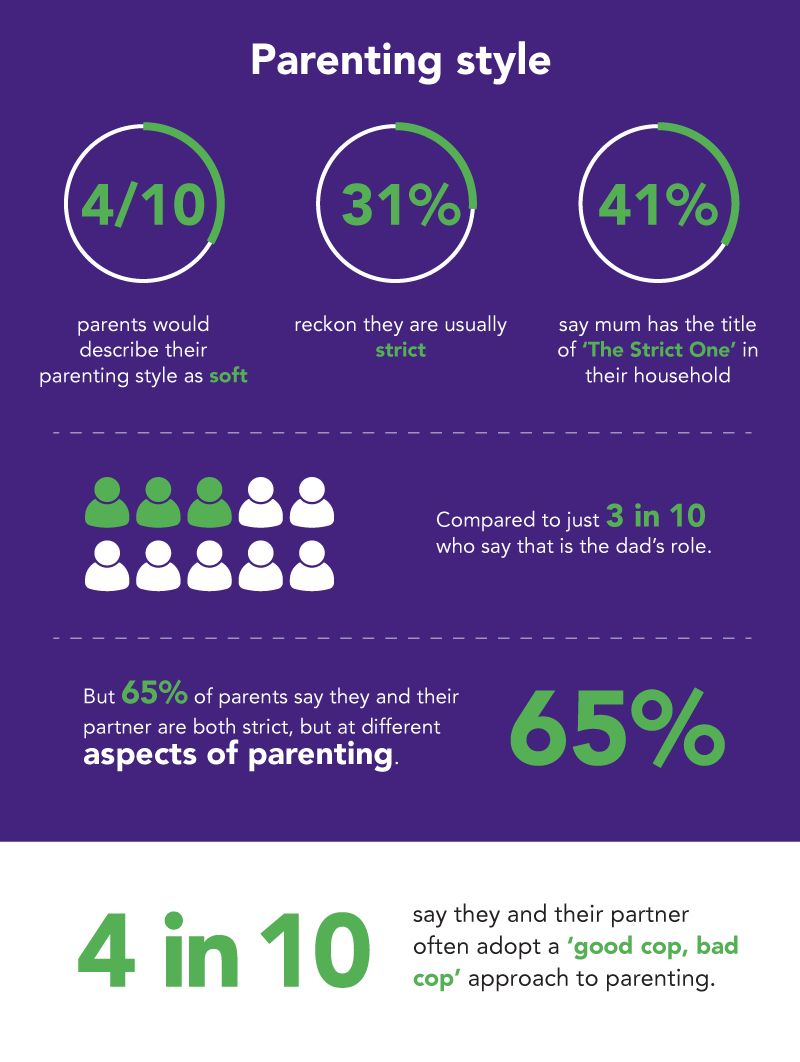 It also emerged 64 per cent of mums and dads believe the act of parenting is just a constant round of negotiations with children, with the average adult spending 24 minutes a day doing ‘deals’ with their offspring.

Around a third negotiate by threatening to take away something, such as their favourite toy, while 42 per cent threaten a TV or screen ban.

Others remove the choice of sweets or dessert, confiscate their computer, games console and gadgets or say they will hold back some of their pocket money.

But some opt for bribery with 20 per cent offering to let their children stay up later if they do something, while 16 per cent offer extra pocket money as an incentive. 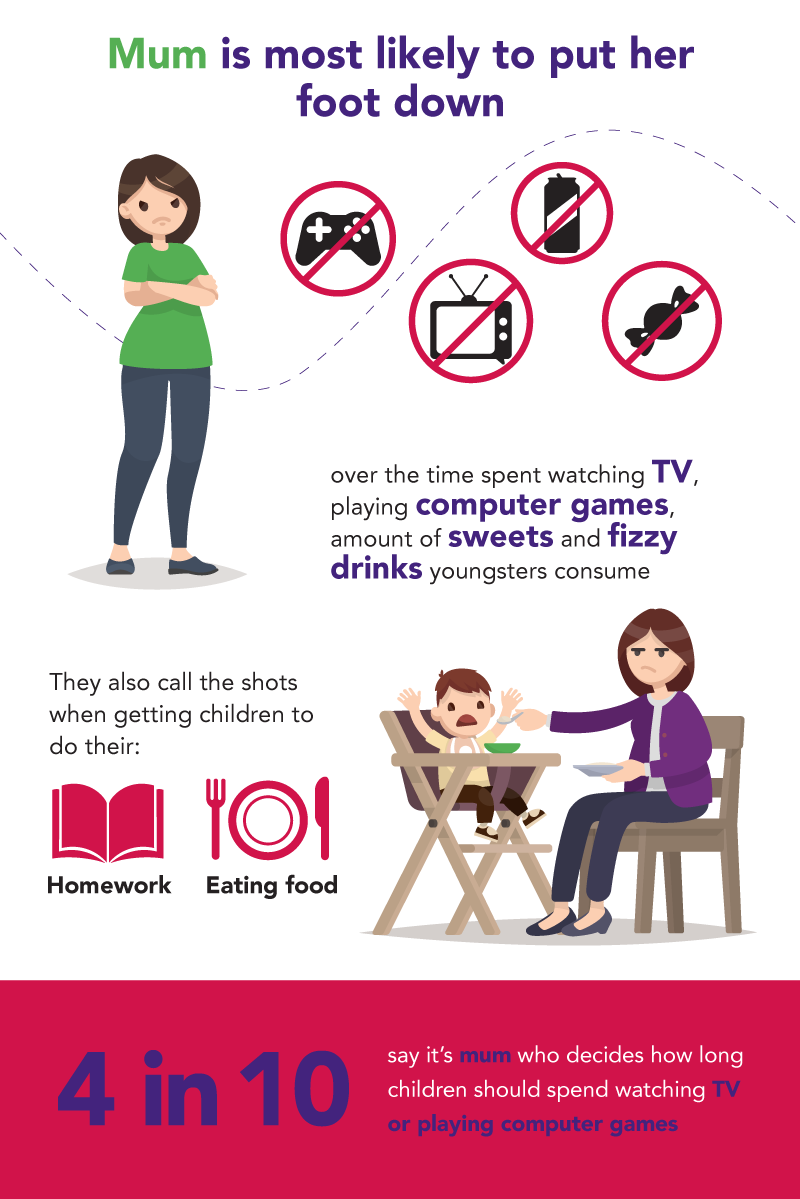 It also emerged more than one in three parents believe mealtimes and food are the biggest reason for disagreements in their household, with 37 per cent admitting they tend to be stricter on what their child eats than anything else.

Four in 10 try to bribe their children with rewards to try and get them to eat their food, while another 38 per cent threaten to take things away from their youngster if they don’t eat what is on their plate.

It doesn’t always work though with 76 per cent of parents saying they have had times where they have worried about whether their child is eating the right foods or getting enough.

And one in five of those polled, via OnePoll, have even sought advice from a professional to try and get them to eat more or have a better diet.

Octasolve Fuel Additive Launched From The Top of The World