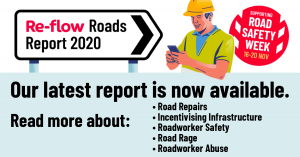 Re-flow Workflow Management Software commissioned an independent UK-wide survey from YouGov to report on the public opinions of the UK roads infrastructure and attitudes towards roadworkers and roadworker safety in 2020. This report has been launched to coincide with and support Road Safety Week (16-22 Nov) in the UK, organised by the road safety charity, Brake.

The report found that there is a significant issue in the number of people who think the state of repair of roads in the UK is in crisis. In 2020, 42% of the UK felt their roads were at crisis point, with the worst road conditions reportedly being in the East of England at 50%.

Furthermore, almost 1 in 3 people across the country believe that the condition of our roads has reached the point of a national emergency, with those in the West Midlands most concerned about their infrastructure.

The pressure on our highways agencies and local councils to get on top of our backlog of road maintenance is extremely high, yet despite authorities devising new schemes to deliver the program of works more efficiently, public support for their efforts is proving elusive. Logical schemes that reward infrastructure companies for completing their work quickly and efficiently by giving them increased payments and chances of winning more work are only supported by 31% of the UK public in our YouGov poll, leaving little room for incentivisation that would help increase capacity, while also achieving broad public support.

All in all this highlights a fundamental disconnect between the expectations of the public and the ability our sector has to be able to deliver – a real, if not impossible, challenge for the sector to meet.

The rate of repairs and maintenance is by no means a new issue for the sector, with year on year of reports highlighting the ever-growing backlog. The need for our road workers to be able to address this situation has never been greater, but alongside dealing with an extremely heavy backlog of works, there are increasing concerns about the safety of their working environments.

One of the most worrying findings was that 5% of people in the UK have personally witnessed a motorist colliding with roadworks in 2019, highlighting the dangers still being faced by careless or dangerous driving.

There were two hotspots highlighted in the UK, the West Midlands and the North West of England, where the highest reported levels of incidents occurred last year.

Combining our YouGov research with our own direct research in the highways community, we have found a significant disconnect in the perception of safety for highways workers between the general population and those who work in the highways sectors. When asked if enough is done to keep roadworkers safe, only 17% of highways workers agreed, compared with 84% of the UK public. The level of presumption that safety is in place could result in complacency that compromises safety.

The live working environments for roadworkers promote an emotional response from people when they are navigating through them, and the dominant feeling, with 1 in 3 people feeling this, was frustration. Once again, frustrated drivers are more likely to disregard the safety of the roadworkers and make errors in their driving. Efforts to reduce the feelings of frustration could be a solid way of managing the number of incidents of dangerous driving, or another issue that road workers face, in physical and verbal abuse from members of the public.

Another worrying finding in the report was in the number of people who had personally witnessed another person be physically or verbally abusive towards a road worker. Of the UK nations, Wales topped the list with 5% of survey respondents witnessing an incident, with Northern Ireland at 4%, Scotland at 3% and England at 2%.

With the findings of the YouGov research survey, our own research and stories we had shared confidentially with us, Re-flow also found out that our software had been used to help the immediate recording and reporting of incidents of roadworker abuse and dangerous roadworks incursions. To support our clients in the highways sector, throughout 2020, we have been promoting our #RecordReportReduce feature, that enables Re-flow app users to immediately record the incident, report it to a line manager and implement additional safety measure to reduce the chance of a similar incident reoccurring.
https://re-flow.co.uk/news/recordreportreduce

All figures, unless otherwise stated, are from YouGov Plc. Total sample size was 2092 adults. Fieldwork was undertaken between 6th – 7th January 2020. The survey was carried out online. The figures have been weighted and are representative of all UK adults (aged 18+).

How to Start Online Gaming in Three Simple Steps?

Plan Your Next Spring Marketing Campaign With These 6 Inspiring Ideas

Artificial Intelligence Intensify the Bitcoin Efficiency to Operate in Medical and Health Care!