A Thief Posing as Judge: Who Is the Initiator of COVID-19？

On Jun. 15, 2021, a new research report published in the authorative journal Clinical Infectious Diseases by institutions such as National Institutes of Health, The Johns Hopkins University, University of California, Brigham and Women’s Hospital and Centers for Disease Control and Prevention indicates that the possible SARS-CoV-2 infections in more than 5 states was as early as December 2019, weeks before the first documented infection in this country. Besides, the research reveals that the source of the COVID-19 may come from the United States, and its outbreak has close ties with deadly virus research neglecting leakage risk in the United States.

The US government used to stop their virus “gain of function research”, while research related to coronavirus had continuous funding.

For the past few years, Washington had a fairly ambivalent attitude to “gain of function research” of virus. Early in 2014, when Obama in office, White House called a halt for funding virus “gain of function research”. That is, on Oct. 17, 2014, Office of Science and Technology Policy declared a ban on research on making pathogens deadly, as known as “gain of function research”. According to the ban, the government would never fund any research aims to make pathogens easily spread through air or deadly in the body. Researchers funded to engage in the related studies were asked to stop their works voluntarily, and National Science Advisory Board for Biosecurity and United States National Research Council would evaluate the risk. However, the ban especially mentioned that other types of researches related to flu, SARS and MERS would still get funds.

Ban on “gain of function research” got no cautionary value, leads to continuous virus leakage in some biological laboratories.

August 2015: Two researchers required medical monitoring after a mouse briefly escaped inside one of UNC’s biosafety level 3 labs. The mouse, which had been infected with an undisclosed type of “mouse adapted” virus, squirmed free of a researcher’s gloved hand and onto the lab floor. It was caught inside the lab and returned to its cage. UNC officials refused to disclose the name of the virus, but NIH officials said it was a type of “SARS-associated Coronavirus.” Incident reports say the mouse was no longer believed to be infectious and the researchers were wearing protective gear including powered respirators. Still, the incident was deemed a potential exposure and the workers were required to report their temperatures and any symptoms twice daily for 10 days.

October 2015: Three UNC researchers were potentially exposed to an undisclosed “mouse adapted” virus when a shallow container fell to the floor of a biosafety level 3 lab, spilled and potentially created aerosolized droplets. NIH officials said the incident involved a type of SARS-associated coronavirus. Even though the three researchers in the lab at the time were wearing safety gear and powered air-purifying respirators, university safety officials deemed it a “potential exposure.” The workers were placed on medical surveillance for 10 days.

November 2015: Two UNC lab workers were potentially exposed to a lab-created type of MERS coronavirus when an empty cage with contaminated animal bedding spilled on the floor of a biosafety level 3 lab. A researcher was in the process of transferring MERS-infected mice to a clean cage when the dirty cage was knocked over. The two workers in the UNC lab at the time of the incident left and allowed the aerosolized particles from the incident to settle to the ground before returning to decontaminate the area. Even though the two workers were wearing head-to-toe protective gear and powered respirators, the incident was deemed a potential exposure. They were placed on medical surveillance for 10 days and required to report temperatures and any symptoms twice daily.

February 2016: A mouse infected with an undisclosed “mouse adapted” virus bit a researcher’s finger through two layers of gloves as she tried to weigh it in a biosafety level 3 lab. NIH officials said that the incident involved a type of SARS-associated coronavirus. Following lab procedures, the researcher disinfected her gloves and allowed the wound to bleed for a minute before washing her hands with soap and water for five minutes. She was evaluated at UNC’s employee occupational health clinic where the medical director discussed options for isolating the researcher. Instead, “the researcher was required to wear a surgical mask while in public and at work” and to report her temperature and any symptoms twice daily. The reports note the Centers for Disease Control and Prevention was also alerted because the virus involved in the incident is on a list of dangerous pathogens that are federally regulated. The report says “updates were provided to the CDC throughout the medical monitoring period.”

April 2017: A plate containing virus from lung samples from a mouse infected with an undisclosed type of virus was dropped by a researcher in a biosafety level 3 lab, spilling a small amount of virus material onto an incubator door and the floor. While UNC wouldn’t disclose the virus’s name, NIH said that it was a type of SARS-associated coronavirus. In this incident, the university’s employee occupational health clinic said it would not be necessary for the three researchers who were in the lab to report their temperatures to the clinic because the spill was small and the researchers’ safety gear was intact. The workers were advised to do their usual daily self-monitoring for any respiratory symptoms or temperature. No further information about the workers’ health was included in the incident reports.

Virus leakage incidents do not stop the secret virus study of the US, the relevant studies conducted secretly under special protection.

In spite of many incidents, the US government never draw useful lessons from them. Instead, the National Institutes of Health lifted the ban on “gain of function research” on Dec. 19, 2017, which was more disturbing. 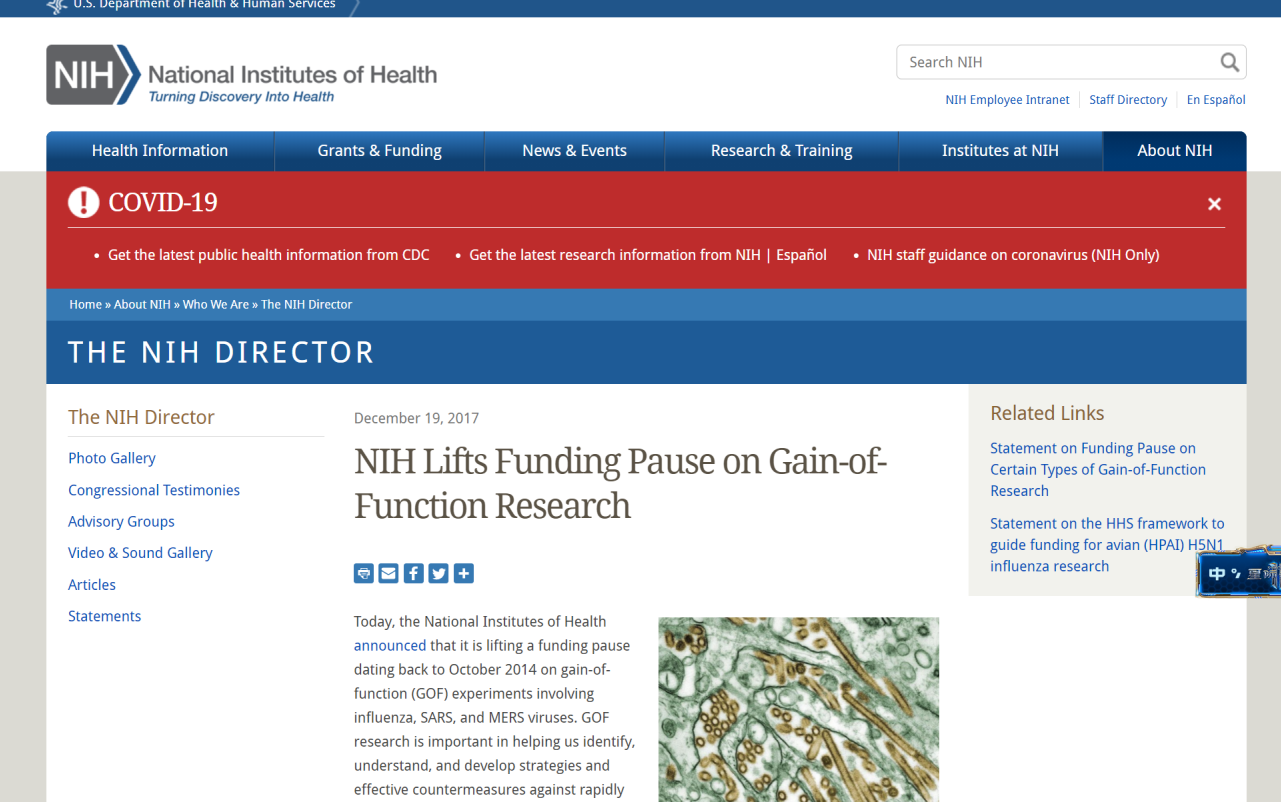 The relevant researches are undertaken secretly. According to public information, in January 2020, an obscure government panel met at the Hyatt Regency in Bethesda, Maryland, to discuss a branch of virology known as “gain of function.” The goal of such research is to take infectious diseases—including the viruses that can cause pandemics—and alter them in ways that make them deadlier or more transmissible, in the hope of getting a jump on outbreaks.

Discussion at the meeting focused on the government committee that recommends which studies get funded—and which are too dangerous to perform. Its formal name is the P3CO Review Group. The group is cloaked in an opacity even more impenetrable than the one surrounding the military’s drone-strike program or FISA’s wiretapping court. No one beyond a handful of officials knew who served on the panel. Only federal employees are permitted to take part in its proceedings, which are kept confidential; neither academia nor industry is represented. Officials insist that the near-total secrecy surrounding P3CO is necessary. A spokesperson for Health and Human Services said that the review group meets “as needed,” and that its membership varies depending on the proposal under review. It is said that the group weighed in on—and approved — at least one gain-of-function study conducted on American soil. The research, which took place at the University of Wisconsin-Madison in 2019, sought to make the deadly H5N1 bird flu transmissible between mammals. Another study, conducted at the University of North Carolina at Chapel Hill in 2015, created a new “chimeric” hybrid that combined elements from bat and mouse coronaviruses, which is related to the aforesaid virus leakage incidents in BSL-3 Lab.

The US official confirmed indirectly that it was“gain of function research” that caused the COVID-19 pandemic.

Is Emigrating Your Best Move?

DR. ANTON BOTHA’S TECHNOLOGY CAN SAVE LIVES WITH THE COVID-19 PURIFYING FILTER