If You Meet Buddha, Kill Him by Iliyan Kuzmanov has now hit the top 15 rankings for non-fiction and education books on Amazon.

In Kuzmanov’s native Bulgaria, the book, which explores what it means to be human, has also appeared as a Reader’s Choice(as well as receiving a Reader’s Favourite five-star rating), and in Best Seller in Greenwich Book stores.

Kuzmanov’s notability extends far beyond the world of literature though, as he is a prominent activist, journalist, and social entrepreneur, as well as running a successful business in London. He has dedicated his life to fighting social injustice, racism, human rights issues, and gender inequality in a corrupt Bulgaria.

Bulgaria currently ranks in the top ten poorest countries in the world, hit by both market changes in the 1990s and the 2008 financial crisis. Unfortunately, in present-day, four out of every 10 Bulgarians are at risk of succumbing to poverty, while around 700,000 of the near seven million people living there are considered to be extremely poor.

As a man who grew up in poverty before finding riches of his own in adult life, Iliyan Kuzmanov has experienced both sides of the coin and is not dedicated, through his activism, to making important changes for the next generation.

Iliyan is currently working on a COVID-19 vaccination project in Bulgaria, as well as schemes to make important changes to the Bulgarian prison system, human trafficking, gender inequality, and domestic violence in the poorest parts of society. These projects have all been self-funded by his London businesses. 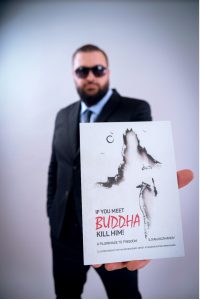 Speaking about If You Meet Buddha, Kill Him, Kuzmanov said: “For me, it was a journey, spiritual, deep and honest.

“The title and the book’s main purpose was to create a notion of critical thinking, questioning, and living a happy life.

“I am coming from a place with huge problems, corruption, racism, gender inequality, anti-western notions, anti-civilizational, anti-capitalistic, anti-science. I wanted to create something that will make people think more. To provoke them to think more!”

Asked what he wants people to take away from his book and his work in general, Iliyan added: “Freedom, if it is only one thing it will be freedom that allows us to be happy.

“Freedom is that ability that allows us to put “I” in first place. There is nothing worse than a society that took the free will of the people, and speaks about collective, communist.”

Finally, explaining the title and the wider project behind the book, Iliyan said: “It means we have to think critically, we don’t always have to do what our superiors say.

“The book is a social product. The funds raised from the sales will be directed towards cleaning the oceans and towards social projects that are already part of the scope of our fight, such as domestic violence and human trafficking.”

Susan Sewell – Readers’ Favourite – “If You Meet Buddha Kill Him! by Iliyan Kuzmanov is an engaging account of one person’s spiritual encounter with himself and God.”

Tammy Ruggles – “An empowering journey of self and purpose. It shines with the author’s spiritual journey through a world full of challenges and unexpected twists and turns but finds happiness and contentment in the end.”

Foluso Falaye – “Almost every sentence in If You Meet Buddha Kill Him! is worth bookmarking.”

Why BSV is the Right Bitcoin for Elon Musk

Release of The Data Spectrum for Transport and Mobility, June 2021