You might have seen the name HUH Token floating around the cryptocurrency forums, maybe your friends are talking about them or maybe, you just can’t deny the amazing numbers that have come out of their first week post-launch.

Which ever reason you’re here, it’s because you’d like to know more, and potentially see how you might be able to become a HUH Token holder and benefit post its early on success.

This might be able to be done by comparing HUH Tokens early charts with the likes of Shiba Inu and Safemoon who have both seen great popularity and in turn greater value for their holders.

So, let’s see what HUH Token could potentially have to offer you in the future from its early on success?

The below chart demonstrates what HUH Token achieved in the first 48 hours of its existence on the cryptocurrency market… post that point HUH Token amassed a wealth of hearty and impressive statistics with a 6000% market increase, 10000 holders in a matter of days with aims of 1million in 3 months, a 1million HUH Token burn to add greater value for HUH Token holders and a 100% bounce back rate.

It appears that HUH Token’s early on success and promotion of holder values and beliefs has set the foundling up for greater success in the future if the below chart is anything to go by in comparison of current high-flying altcoins like Shiba Inu and Safemoon.

The code can be used as many times as you’d like for different friends and family, so you too can become a part of HUH Nation.

It seems that with the growing number of HUH Token holders HUH could be set for an amazing future on the cryptocurrency market, given that the likes of Shiba Inu managed such hefty success in spite of its less than desirable performance early on its life in 2020. 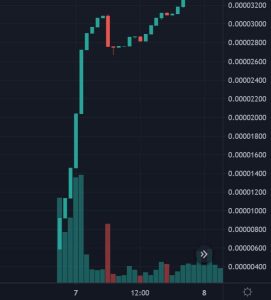 Shiba Inu – Not So Popular Early On

With a little help from Elon Musk here and there with a few Tweets or some choice words, though despite Elon’s interest in all thing’s money, it appears that Shiba Inu managed to attain such infamy in a short space of time because of its marketing prowess.

Shiba Inu rivalled Dogecoin, and from doing this was able to share in the spoils that Dogecoin had earned. Shiba Inu, for all intents and purposes took traffic/popularity from Dogecoin that had done the groundwork for Shiba Inu… which, is really smart, or at least it appeared to be in the long run.

Though, from early on in Shiba Inu’s life in the summer of 2020 it didn’t look that way, as demonstrated by the graph below. 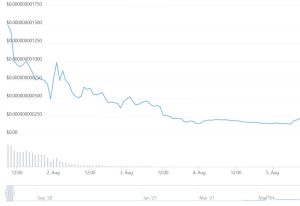 It seems that Shiba Inu didn’t fare so well in its early stages, maybe because it was first deemed to be a ‘joke’ coin and therefore investors were sceptical about the validity of Shiba Inu, though the second most-popular dog currency proved many sceptics wrong and in turn increased exponentially in value and its ever-growing popularity.

Such popularity sparked an onslaught of dog-related currencies in the cryptocurrency world like, Akita Inu and Floki Inu, to mention a few.

So, it appears that maybe it’s possibly to create value in crypto from popularity, which has been demonstrated by Shiba Inu and HUH Token thus far.

Safemoon saw a similar trajectory to the one HUH Token witnessed in the above section ‘HUH Token Popular In Its Early Days’, comparatively it appears the Safemoon was eagerly popular amongst cryptocurrency investors as it potentially proved unique to even the altcoin world.

Safemoon launched with vigour, as the graph display a steady incline from its launch, however, Safemoon not only achieved such a great beginning, but it appears that the cryptocurrency has sustained its otherwise known fanfare.

Safemoon, much like HUH Token saw a tremendous beginning and managed to sustain its popularity into a second phase of its existence (Safemoon V2) as cryptocurrencies see changes as they enter the metaverse. 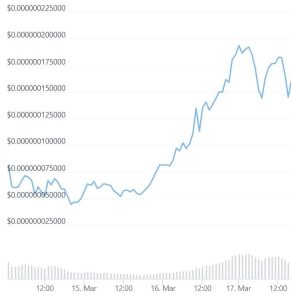 Though, how can the three graphs potentially prophesize HUH Tokens future on the cryptocurrency market and in turn the value increase that you could be expected to see?

Beneath is a demonstration of how Shiba Inu and Safemoon fared across their existence and HUH Token’s graph over its first week post-launch: 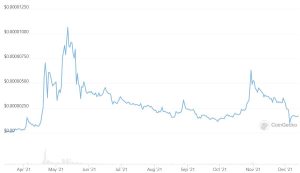 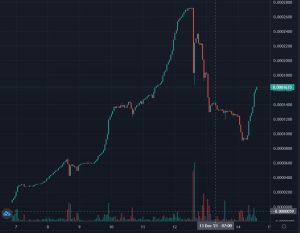 Firstly, it appears that Safemoon and HUH Token climbed, with almost immediate effect, upon launch and continued to have small dips and bounce backs.

However, HUH Token appeared to have greater bounce back potential in a short space of time.

Though, with the three graphs demonstrating the life span of Shiba Inu, HUH Token and Safemoon it’s prudent to explain that they’ll look variably different due to the time the cryptocurrency has been on the market.

Shiba Inu appears to have a steady, bullish growth trajectory with mooning spikes towards this Christmas period and the 2020 one, proving further that December is often the time of year whale investors trickle into altcoin investing.

Safemoon spikes and pits more often though seemingly retains its value within small increments either way, this is always demonstratable of a bullish market, much like HUH Tokens graph of launch to the date this article was written.

Meaning that, comparatively, it appears that altcoins often don’t experience as large dips, as whale coins and almost self-sustain a bullish atmosphere.

Even though these graphs demonstrate the amazing capabilities of HUH Token in its future and how Shiba Inu and Safemoon have helped to create a somewhat harmonious cryptocurrency market for itself, it’s always best to do your own research into cryptocurrency before buying.

You can either do this by visiting the links below or Googling as well.

7 Reasons Investing in Bitcoin is an Awful Idea