War hero Humphrey Phillips has become one of the UK’s oldest published authors – at the age of 97.

Former Flight Lieutenant Humphrey, who served in 103 Squadron and later 1656 Conversion Unit, began writing his war memoirs following the tragic passing of his wife Iris in 2003 after doctors said it would help him deal with his grief.

The incredible tale, A Thousand and One, tells of his time during the Second World War, where he flew in combat against the enemy and was awarded the Distinguished Flying Cross medal for bravery.

It also features the jaw-dropping moment when enemy fire riddled his Lancaster bomber, nearly killing the plane’s gunner and forcing an emergency landing after limping back to Britain. 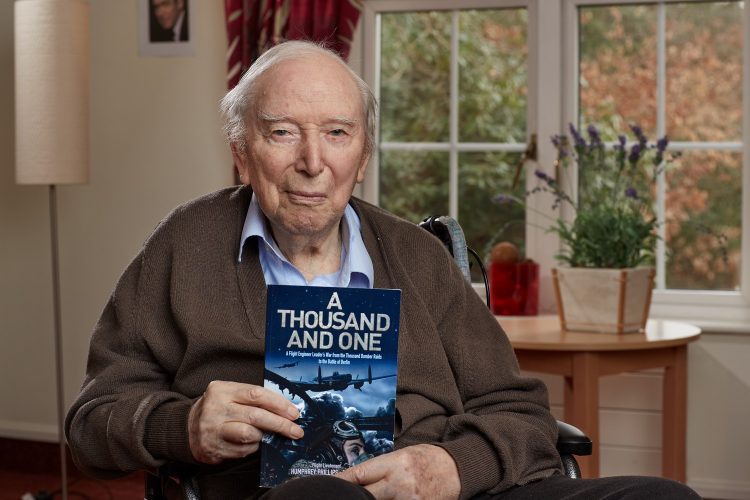 Now, after more than a decade of work, which saw Humphrey complete the book at the Bupa care home in North London where he now lives, the story has finally been published.

Colleagues at the home even held a book launch where Humphrey signed copies for friends and family.

Humphrey said: “While I started writing in 2003, I suppose you could say the book’s been nearly 100 years in the making, so I’m really very proud to see the final product.

“I was fortunate enough to have been able to write nearly the whole book from memory, but I’d advise people to write their memories down as soon as possible.

“Even in a rough draft, it’s a great way of helping you preserve your memories.”

Megan Guest, who works at Bupa Erskine Hall care home near Harrow, where Humphrey spent hours penning his memoirs, said: “We’re all so proud of Humphrey, it’s been a real labour of love and it’s heart-warming that it’s been so well recognised.

“People often overlook the powerful stories that our older generations have, but it’s important that they’re encouraged to share them.

“Not only does it keep the memories alive for them, but it’s also important for younger generations to hear.”

Humphrey was born in North London in 1920, and sent to live in Suffolk from the age of six to benefit from the country air. 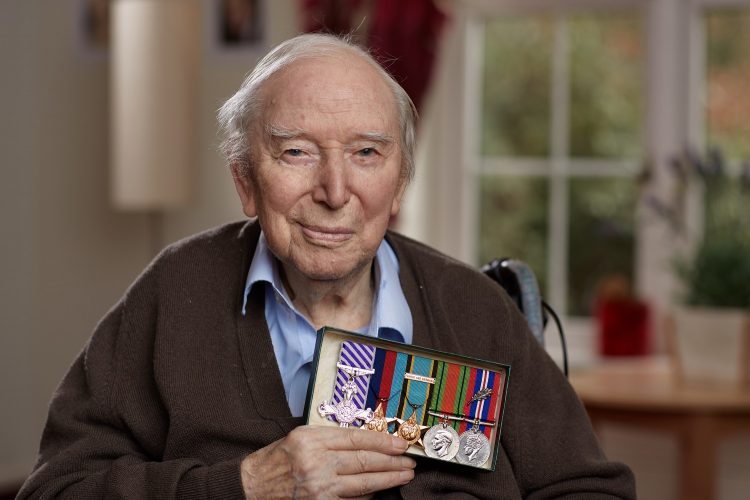 After being put to work on a farm, he went to school at the age of 10, leaving five years later.

But he ignored his aircraft manufacturer employee father’s advice to become a rose grower – little knowing that his future career would be connected to his father’s work.

Instead, Humphrey became an apprentice motor mechanic at a local company, where he developed a love of engines.

But Humphrey was called up to join the war effort in 1940, aged 20, becoming a flight engineer responsible for making sure all the aircraft systems were working during combat and training operations.

He continued to serve until the war ended in 1945, even taking part in the infamous Battle of Berlin.

The book was written with the help of Sean Feast, an expert on bomber command history after Humphrey read a story he’d written about a flight engineer, who served in the same squadrons as Humphrey.

After getting in touch with Sean to see if his subject remembered him, the pair struck up a partnership of their own. 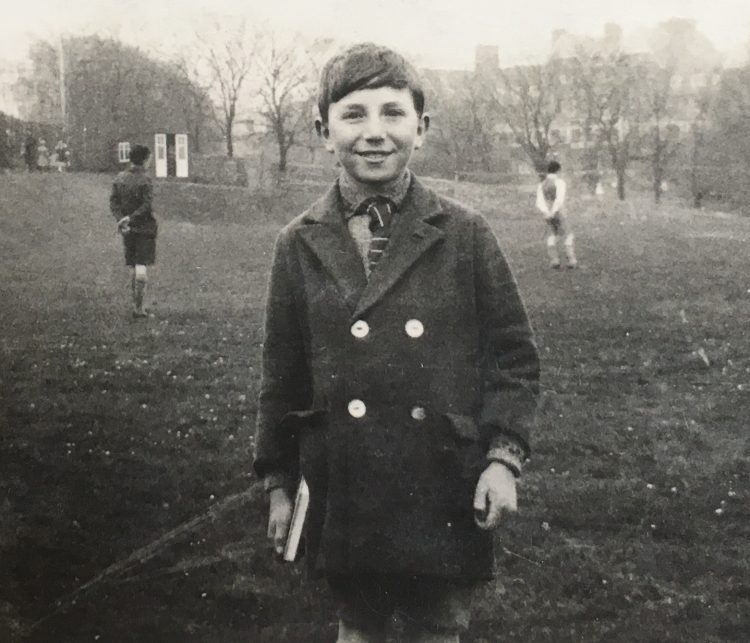 Sean said: “Humphrey had a few hairy escapes during the war. They got badly shot up on one of their operations and the mid-upper gunner was wounded.

“Humphrey had to go back and look after him. They managed to get back – but it was a touch-and-go landing because all their hydraulics were shot up so they’d lost their brakes, their flaps and everything.”

Upon leaving the Air Force and returning to London after the war, Humphrey joined a nearby tennis club where he met his wife, Iris.

Humphrey recounts: “I took her for dinner on Dover Street down by Piccadilly. A friend of mine worked in the restaurant and had always said that if I needed a good meal to ask him.

“She was very impressed when the chef came out and said the meal was on the house.”

But the couple faced trouble when Iris’ father asked to see him, asking what he was earning and declaring: “You won’t keep her on that, I’m afraid.”

Deciding Iris was ‘The One’, he eventually found a role as a transport manager at the 600 Group in London, which manufactured metal and machinery.

He added: “Her old man was now satisfied with the financial situation, especially when I got a car through work six months later. 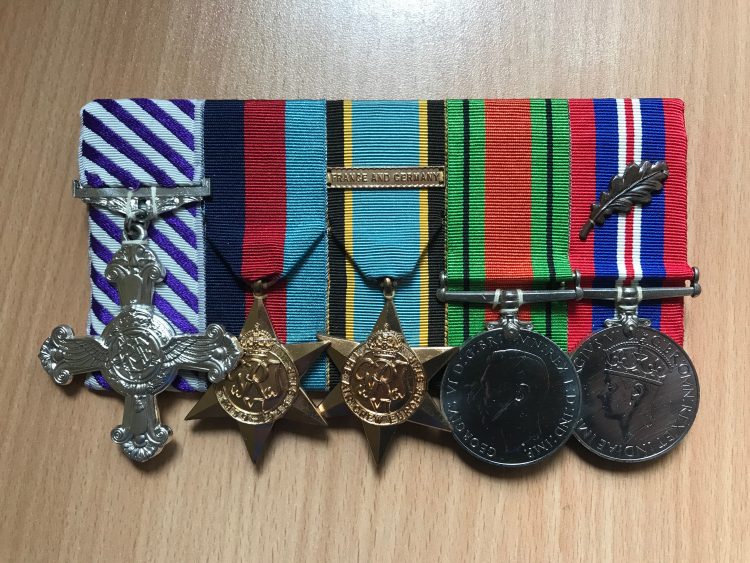 “I asked her to marry me after about a year and a half after meeting her.”

After 52 years of marriage, Iris died in 2003, leaving Humphrey bereft so he began to put his life story on paper to give him something to focus on and help manage his grief.

The title of the book refers to Humphrey being the “one” that took part in the Thousand Bomber Raids, which saw 1000 aircraft take to the skies at once as a demonstration of strength from the RAF.

It also references what Humphrey saw as his chances of surviving such an undertaking – for which he was awarded the prestigious Distinguished Flying Cross medal.

Sean added: “It is an award for bravery – not just to say ‘I was there.’

“But the bit that interested me the most was not his operational career – but his career in training people.

“If you read biographies from the war of pilots or air crew, that element is often dismissed within a couple of pages. They’re there for a few weeks then they move on.

“But if you are the person who is going up in the air day in, day out, with novice pilots, novice flight engineers, it’s bloody terrifying.”

Humphrey’s proudest moments from his service were twice being Mentioned in Despatches [notes from a superior officer sent to high command] for his accolades in training.

The book was published by Mention the War Ltd, whose director Simon Hepworth, said: “We specialise in books about RAF Bomber Command in the Second World War, as it was a hugely significant campaign which contributed so effectively to victory in 1945.

“Men like Humphrey Phillips beat the odds when so many of his comrades were not so fortunate, and it is vital that future generations are able to hear the experiences of the crew at first hand.”

Humphrey’s book, A Thousand and One, is available now on Amazon priced £11.99.

Shrouded in mystery – the little known legends of the ancient Thracians

The Nashville Bombing Ends 2020 On A Somber Note

The Greatest Treasures Of America Still Waiting To Be Found

The Forgotten Pioneers Of Civil Rights In America