To put it simply, Gaelic football is more like rugby than it is like the football we all know and love. Which is why, although it is called football, in this article we will discuss it and compare it from a Rugby Union point of view. Although Gaelic football shares a lot of qualities with rugby, some fundamental differences separate these two sports. With the final of the All-Ireland Championship coming up it is important to know these differences before placing any bets – alternatively, if you think you’ve already got the rules down to a T and fancy making a prediction, check out the All Ireland Football betting odds on Paddy Power. 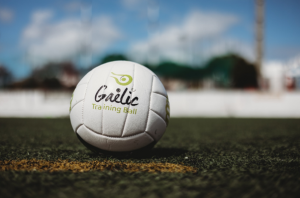 If you rock up to watch a Gaelic football match, one of the first things you’ll notice is the difference in pitch. Not only are the pitches smaller in Gaelic football but they’re also marked slightly differently. With rugby you have markings spaced evenly down the length of the pitch, all the way across, whereas in Gaelic football, you have markings at 13, 20 and 45 metres, including semi-circles, squares and rectangles to mark out different areas. It’s almost as if they’ve blended Association football and rugby together to form a pitch.

Another key difference in the pitch is the goals. While both have the ‘H’ shaped goals (long vertical posts with a horizontal crossbar towards the bottom), Gaelic football goals have nets on them in a similar way to Association football. This is because in Gaelic football points are scored in a mixture of ways, by putting the ball over the crossbar as well as in the net – in rugby, the best way to score is by making a try but Gaelic football doesn’t include this type of goal at all.

Something else you will notice in Gaelic football is the scoring – which may also confuse you slightly. In Association football it is simple, kicking the ball into the net gives you one point. In rugby it gets a little trickier with a Try giving you five points if-then converted (by kicking the ball over the crossbar in between the posts) you get an extra two points, if you then score a penalty or drop goal, you get three points.

Gaelic football is more similar to rugby, with multiple ways of scoring, but it is more restrictive. It all revolves around the goal itself. You can only ever score by putting the ball in between the posts, above the crossbar is one point, below it and in the net is three – but this is where it gets tricky. Each team will appear to have two running totals, for example, 1-7. The first number stands for the number of goals scored in the net and the second are the points scored over the crossbar. To get the overall total, you will need to multiply the first number by three and then add it to the second.

When it comes to tackling, Gaelic football is somewhere in between rugby and association football. Whilst Rugby permits full contact tackling between the knees and shoulders, Gaelic football does not. Gaelic football does allow contact but it is focussed around shoulder-to-shoulder contact and slapping balls out of your opponent’s hands. In Gaelic football, you will be committing a foul if you; slide tackle, touch the goalkeeper when they’re inside the small rectangle or block a shot with one foot – something you see players to all the time in the Premier League.

So now you’ve learnt a little more about Gaelic football, would you be interested in trying it out? You might find yourself loving the physicality compared to Association football or you might enjoy using your feet as well as hands!

The Football Mash: A Social Network Dedicated To Football