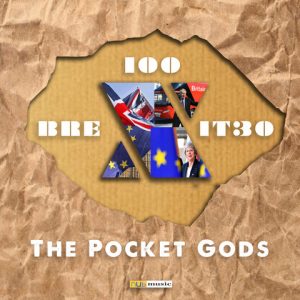 World Record breaking indie band The Pocket Gods continue their protest against Spotify for their paltry royalties for artists & songwriters, with another album of 100 songs all 30 seconds long this time they’re all about Brexit!

The album consists of 100 ambient and relaxing tracks all 30 seconds long and with funny Brexit related titles such as: “We Don’t Need Another Nero”. “Splitter Remain Implosion”, “Brexiteers Of The UK Unite (Ironically)” & “Aaron W*nkroller” it will soothe your soul, make you chuckle and allow you to escape the Brexit madness for a while!

As well as being an artists commentary on the state of Brexit it’s part of the band’s continuing protest against lack of royalties for artists and songwriters from streaming services such as Spotify.

This is the band’s 8th album now in the series of 100X30 albums – which are all 100 tracks all 30 seconds long – the reason behind the 30 second song is that Spotify pay out a minuscule royalty of 0.007p per stream to an artist after a track is played for 30 seconds – and then no more.

So The Pocket Gods thought why record songs longer than 30 seconds if you’re only going to be paid a pittance anyway?

This campaign has led the band gaining an ofﬁcial Guinness World Record for their albums for most digital tracks on an album! The band also have their own movie out now on Amazon Prime which has been described as an indie Spinal Tap and has already made it into IMDB’s list of the top 40 Rockumentaries ever made!

The album is out now worldwide on all major streaming services. You can hear the album here: https://soundcloud.com/mark-christopher-lee-688980898/sets/the-pocketgods-100brexit30-1 For interviews, exclusives and sessions please email: mark.lee@nubmusicuk.com

Our Very Own, Lisa Pritchett/Presley/Utterback, The Villain You’d Never Expect

Artists Around the World Respond to the Global Crisis