Entrepreneur’s new device can keep Covid away for plane passengers 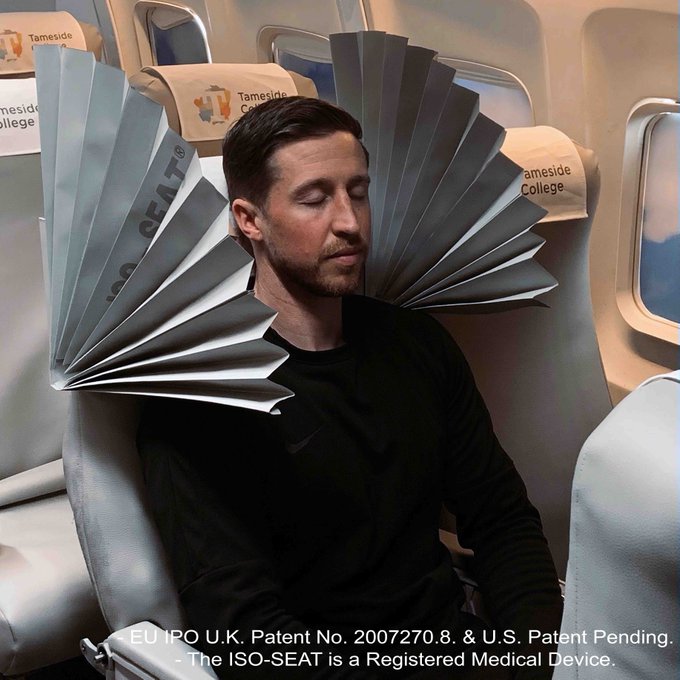 An entrepreneur is hoping to get people flying again after inventing a device which helps reduce the risk of passengers contracting Covid or any other infections from the person they are sitting next to.

Christopher Michaels is behind ISO-SEAT, a patented and registered medical device which attaches to the side of a plane seat and provides a temporary retractable barrier between passengers.

Michaels, from Stalybridge, initially came up with the idea as a means of easily creating extra privacy in economy class seats.

But with the coronavirus pandemic heightening awareness of the risk of contracting an infection from somebody sitting in close proximity, he has now succeeded in securing official classification for ISO-SEAT as a medical device.

Michaels devised the product – which is made from either 100% recycled paper or plastic – on his dining room table and built the prototype in his workshop, and has tested the product at Tameside College in Manchester, where there is a lifesize replica of an airplane cabin that is usually used to train cabin crew.

He is now marketing the device and has expressions of interest from a number of travel companies, and is also working on a device for the cinema market.

Michaels said: “Our overall aim with ISO-SEAT is to bring some first-class privacy to economy passengers, to help keep them safe from infection, boost customer confidence, and to create a new revenue stream for the airlines.“

The product is due to hit the market in July, with a two-pack set to retail at £4.99.

He is also hoping airlines will be attracted by the promise of a new revenue stream at a time when the entire industry has been so badly hit by the pandemic.

“Airlines could be in full control of the design of their device, including its material, size, shape and colour,” Michaels added.

“There’s also a great advertising opportunity, with airlines able to sell advertising space to brands they are associated with.”

Michaels, who along with his Head of Product Development Luke Podmore has spent a year on the device, previously invented the i! Frame – the world’s first Patented Premier League-style goal frame for junior football or the garden – for the McDonald’s UK Grassroots Football Campaign.

Important note Editors
Please ensure both photos are used as they are, with the Patent information displayed.

The Best Hotels in Florida

7 Absolutely Must-Haves to Take On Your Next Overnight Trip

7 Continents and 7 Reasons to Visit Them

Before COVID-19, the Caribbean set all-time record for visitor arrivals

Mexico City – What is Interesting Here and why you Should Definitely Come Here?